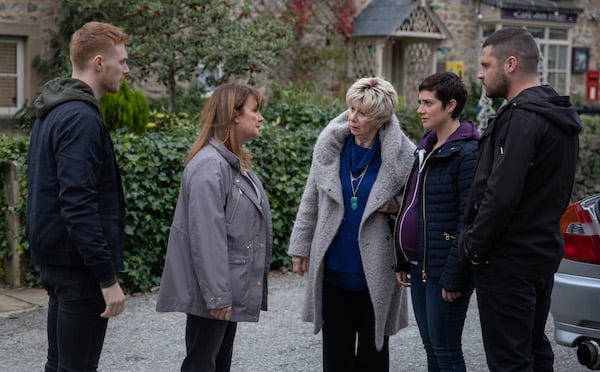 Wendy is the mother of Victoria's rapist

Viewers of Emmerdale have been left disgusted as ‘psychopath’ Wendy Posner decided to move to the village where Victoria Sugden lives.

Since discovering Victoria’s pregnancy, Wendy has been determined to see her grandchild once he’s born, even more so after Lee was killed by Victoria’s brother Robert.

Despite Wendy also being the mother of Victoria’s love interest Luke, with Wendy not believing Lee raped Victoria, she isn’t exactly in Victoria’s good books.

Wendy’s a psychopath. Why move into the village?

However, in last night’s episode of the soap (December 2 2019), Victoria’s stepmother Diane saw Priya telling Wendy a house in the village was all hers.

Wendy told Priya she couldn’t wait to get moved in as she had a new job and a grandchild on the way.

Viewers were disgusted that Wendy made plans to move into the village and live on the same street as Victoria.

Wendy's a psychopath. Why move into the village? #Emmerdale

Wendy moving into the village is the worst storyline ever! I’m done with #emmerdale

Wendy can actually disappear at this point. Any sympathy I had for her died the moment she decided to move onto Victoria's street without consulting her. She's traumatising her with her presence. They can't make me like her after this. It's too much. #Emmerdale

Wendy a stalker move in across street #emmerdale

I hope we're not supposed to feel sorry for Wendy,cos that's not happening! I still find her moving to the village in poor taste, she is coming across as having a screw loose frankly. Another nutty nurse a Emma 2.0 on the cards? But turning her into a victim, just no! #Emmerdale

If they want me to be all 'poor Wendy!' they are in for a shock, because I'm actually pretty keen for her to stop harassing the woman her son raped!!! She is actively hurting Victoria and retraumatising her, and she DOESN'T CARE. #Emmerdale

Despite viewers’ disgust, it looks like Wendy plans to stay.

Later this week, Victoria finds out about Wendy’s new living arrangements and is devastated.

When Luke tells her he had no idea what his mum was planning, she doesn’t believe him.

Wendy is left shaken when someone smashes the window of her new home.

But things get even more difficult when Victoria starts to feel contractions and midwife Wendy turns up to help her.

Will Victoria’s baby be delivered by its grandmother?