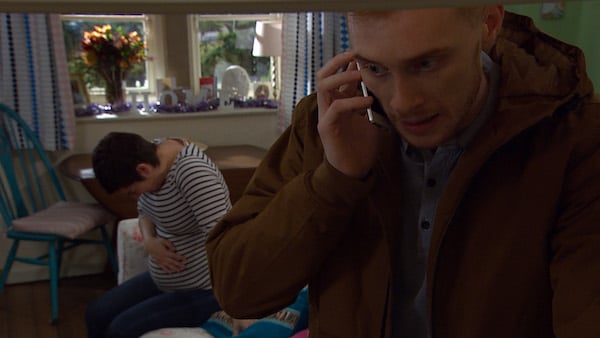 Is the baby about to arrive?

There’s baby drama heading for Emmerdale next week when Victoria Sugden thinks she is going into labour weeks before her due date. Is the baby making an early appearance?

The trouble starts for the mum-to-be when the news that rapist Lee’s mum Wendy Posner has made the shocking decision to move into the village reaches Victoria.

Diane Sugden is floored when she discovers the mother of the man who raped Victoria and left her pregnant, is moving into the village, and she desperately tries to keep the news from Vic for as long as she can.

But of course, nothing stays secret for long in Emmerdale, and Victoria soon discovers the truth about her new neighbour.

Victoria is devastated that she will have Wendy just across the road as a constant reminder of her sexual assault at the hands of deceased Lee, and she confronts Luke, who is adamant that he had no idea what his mum was planning.

Victoria and her family confront Wendy, but eventually the argument opens a whole new can of worms when Luke tells his mum that he believes Victoria and doesn’t think that she would lie about Lee raping her.

As Wendy fights to stay clam as her son lashes out against his late brother, she is adamant that she isn’t going anywhere, and remains determined to stay in the village and see as much of her grandchild when it is born as she can.

But that might be a decision that she regrets when late at night, someone sneaks to Dale View and smashes her windows.

As Wendy hurries out into the darkness to see what has happened, she shouts into the night at the mysterious culprit… but who would target her?

After the drama of windows being smashed, it seems the stress is all too much for poor Victoria and she starts to feel contractions.

Worrying that the baby is coming too soon, she starts to panic, and it is Luke who is forced to call for help.

But Victoria is aghast when midwife Wendy turns up to help her… is the baby about be be delivered by its own grandmother?

Do you think Wendy should be allowed to move to the village? Leave us a comment on our Facebook page @EntertainmentDailyFix and let us know what you think!