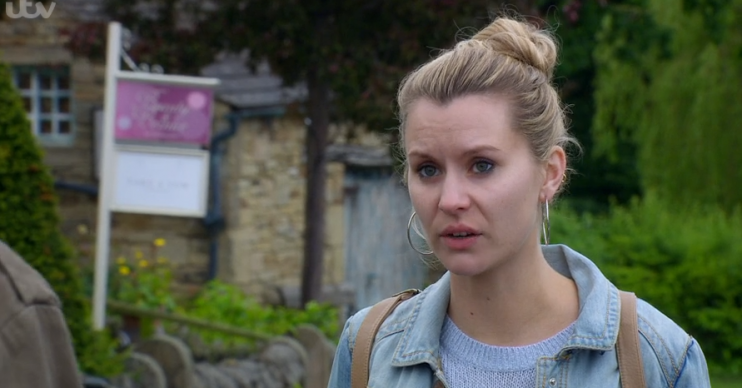 Emmerdale viewers are disgusted with Dawn Taylor after she admitted she revealed Lydia Hart’s information to the press.

A couple of weeks ago, the village was shocked to hear the remains of a baby had been found at Hotten Academy.

The police soon announced they were looking for a woman named Jenny Finn who would’ve been a teenager at the time the baby was born.

Shortly afterwards it was revealed that Lydia was in fact Jenny.

After going to the police admitting that the baby was hers and giving a statement, Lydia told her fiancé Sam that she fell pregnant at 15 with a boy in her maths class.

She found out she was pregnant and was terrified once her baby was born that he would be taken from her because she was only 15 and in care.

She revealed she went into labour and gave birth on the top bathroom of her care home but when her son was born she soon realised that her baby was born sleeping.

She wrapped him up and snuck him out of the house and decided to bury him in a woodland area.

After burying her son, she ran away to Scarborough and met a woman named Lydia Hart who lived in the bedsit above her.

Since the police decided not to take the case any further, Lydia has been struggling with her guilt and feels she should be punished.

In Friday’s episode (July 12 2019) a reporter named Janice Robert sarrived at Wishing Well Cottage and tried questioning Lydia but she broke down in tears and Sam told the reporter to get off the property.

Dawn later met up with Janice to get money for giving her Lydia’s home address but she was being watched by Ryan.

In yesterday’s episode (July 15 2019) Lydia tried to flee the village from the Woolpack. As Sam tried to stop her, Ryan, Harriet, Dawn and Belle gathered round.

As Dawn tried to steer Harriet away, Ryan confronted Dawn saying he saw her talking to the reporter.

Dawn apologised for what she did but viewers weren’t so forgiving.

That's a nasty thing to do Dawn #Emmerdale

yaaaaaaaaaas!
i'm glad Ryan has grassed Dawn up for seeing her with the reporter.
let's see if she thinks the repercussions were worth what she was paid to tell the reporter where she could find Lydia.#Emmerdale

Later in the pub, Faith gave Dawn a hard time for what she did to Lydia and Dawn revealed that she was desperate for money for her son Lucas, giving Robert an idea.