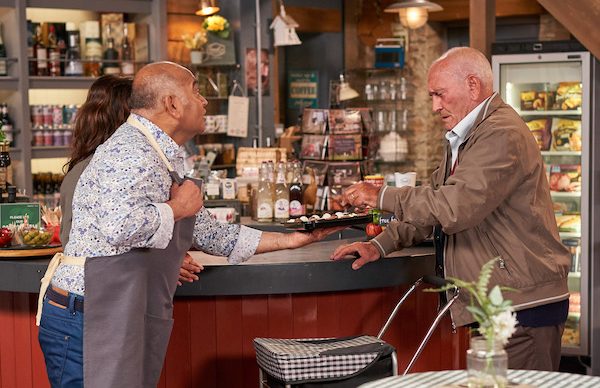 Viewers shouldn't get too attached to him

The former half of the Cannon and Ball double act plays Derek, a pensioner patient of Manpreet’s – but fans shouldn’t get too attached…

He’ll be dead within weeks.

Derek arrived in the village and immediately made an impact demanding to know how long Brenda’s buns had been on display in the cafe.

Within minutes he was chucking up in the loos and bringing some comedy to the soap and fans loved it.

One said: “Err, is that Tommy Cannon?? #RockOnTommy”.

A third said: “Do my eyes deceive me? Did I really just see #TommyCannon in #Emmerdale?!”

However, it has already been revealed that Derek will soon meet his maker after eating one of Rishi Sharma’s chocolates.

Rishi is going to brush off any concerns that his chocolates might be to blame for Derek’s death until David also becomes unwell after eating one of his creations.

And when the cause of his death is called as salmonella poisoning Rishi begins to panic.

Answers about who killed Derek will be coming but he won’t be returning from the dead.

Do you think it’s a waste of Tommy? Leave us a comment on our Facebook page @EntertainmentDailyFix and let us know what you think!