Marlon Dingle has been left broken-hearted AGAIN in Emmerdale after discovering his wife, Jessie, cheated on him with her ex, Al Chapman.

The devastated chef decided to end his marriage last week, saying he was "no-one's consolation prize", but it looks like Jessie will try to win him back.

Actress Sandra Marvin, who plays Jessie, has already announced her departure and it's likely that on-screen she'll move to Dubai to take up a teaching opportunity there.

Marlon made the hard decision to end his marriage after less than a year (Credit: ITV/YouTube)

But has the soap held back the fact Dales veteran Marlon will go with her?

Jessie has been floundering ever since she lost her job as headteacher at the local school over the Maya Stepney grooming scandal.

A recent interview for a position in Dubai, set up by Al, saw Marlon unhappy that his wife was considering such a move - and Al came in for the kill when he supported Jessie and the exes ended up sleeping together.

Mandy walked in on Jessie and Al (Credit: ITV)

Mandy Dingle caught them and she forced Jessie to tell Marlon the truth.

After less than a year wed, Marlon ended his fourth marriage, but this week it looks like Jessie wants to save it. Chas has some words of wisdom for Marlon (Credit: ITV/YouTube)

In a preview for tonight's episode on the soap's official YouTube channel, Chas visits Marlon and tells him not to break April's heart unless he really, really has to.

He asks her what she would do if her other half, Paddy Kirk, slept with his ex-wife, the recently returned Mandy.

Chas insists it's different because it would never happen, and Marlon tells her he doesn't want his marriage to be over, but he doesn't know how to move past it.

Meanwhile, with the school in Dubai still keen to have Jessie on board, they make her another offer this week.

Wanting to make amends, and insisting she loves Marlon and their life together, Jessie asks him and April to go with her. 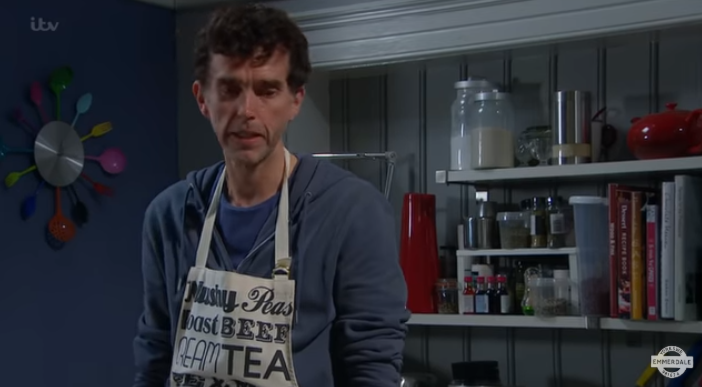 Marlon has a big decision to make (Credit: ITV/YouTube)

With Chas's words about April ringing in his ears, and his own heartbreak still so raw, will Marlon actually consider the move?

Although Emmerdale hasn't announced actor Mark Charnock's exit, they do have a habit of surprising us and keeping these things under wraps...

Could the show legend be in line for a low-ley departure? Or will Marlon realise his place is in the Dales - without Jessie?