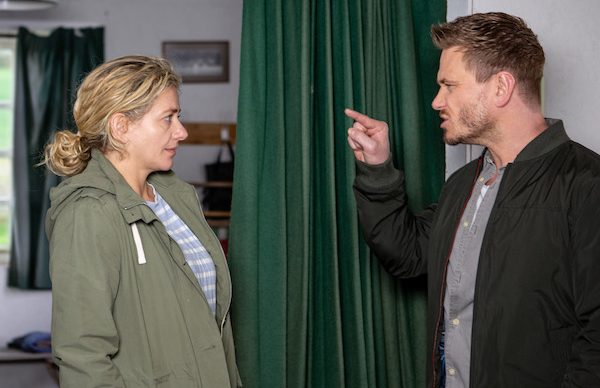 What will he say to the woman who destroyed his whole family?

Ever since the sickening news that Maya has been sexually abusing Jacob came out, David has been blaming himself for not noticing what was happening right under his nose.

Emmerdale fans have watched as David has been on a rollercoaster of emotions since discovering what Maya has been doing, and next week he will finally get the chance to confront his girlfriend face-to-face and tell her exactly what he thinks of her.

Knowing that Jacob and Maya are still in contact, David gets Ryan to upload some spy software onto Jacob’s laptop so that he can see what his son is planning with evil Maya next.

Ryan is uncomfortable about getting involved but agrees to help, and soon David is able to see the messages that Maya and Jacob are sending to one another.

Later Jacob heads over to Leyla’s under the pretence that he is going to revise for his GCSE exams. But as soon as Leyla’s back is turned, he starts rummaging through the draws at her house to find Maya’s passport.

As soon as he finds it, Jacob happily messages Maya and tells her he has found what they were looking for… totally oblivious to the fact David can see everything he is saying.

As Maya and Jacob plan their getaway to start a new life together away from Emmerdale, they have no idea that David knows their every move, and as Maya later waits for Jacob at the cricket pavilion she’s stunned when David turns up instead.

David is fuming as he confronts Maya, weeks of pent up anger and disgust coming out as they argue. But still Maya is playing the victim, begging for a second chance and even promises to leave the village and Jacob for good if David lets her go.

As their argument gets heated Maya tries to do a runner past David, but before she can get away where she’s stopped dead in her tracks as police sirens start approaching.

Jacob arrives just in time to see the police arrive and Maya’s world starts to crumble as the police arrest her – finally her lies and sickening abuse catching up with her.

But with Jacob bereft as Maya is bundled into a police car, David inwardly hopes he has done the right thing by calling the authorities and making sure Maya faces the consequences if her heinous actions.

Are you glad Maya is finally facing the consequences of her actions? Leave us a comment on our Facebook page @EntertainmentDailyFix and let us know what you think!