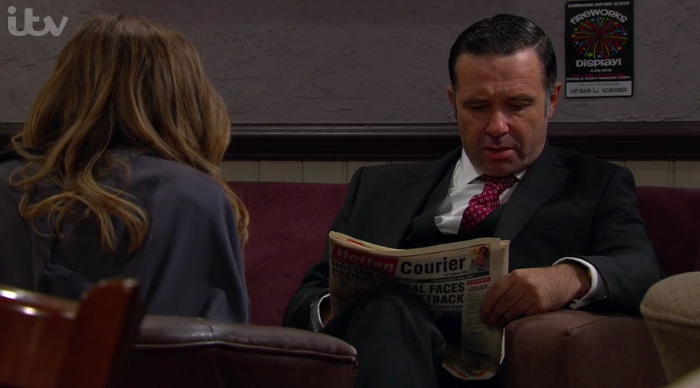 Graham Foster tried to read a newspaper inconspicuously last night, but Emmerdale viewers noticed he made a bit of a schoolboy error while doing so…

On Wednesday night (October 30), the usually on-the-ball Graham showed that perhaps trying to please two women was becoming a little bit too much for him.

Kim’s henchman attempted to immerse himself in the Hotten Courier at the village cafe, when Andrea Tate joined him to talk about Graham’s mysterious new woman.

Viewers know Graham has been loved-up with Rhona Goskirk for some weeks now, but had been trying to keep her identity secret from his psychotic boss.

But some eagle-eyed viewers noticed that Graham’s source of news was somewhat out of date!

According to the date on Graham’s newspaper, it was June 15, 2017 – more than two years out of date!

Why is Graham reading a Hotten Courier dated June 2017?

One viewer tweeted: “Graham’s paper is a bit out of date.”

Another said: “Just watching tonight’s Emmerdale. Graham is reading a paper with a date of 15th June 2017. Doh!!”

Graham's paper is a bit out of date pic.twitter.com/TPUcsOVOH5

A third said: “Paper is a bit out of date Graham #pastsellbydate #emmerdale #ITV.”

“Emmerdale why is Graham reading a Hotten Courier dated June 2017? Is there no up to date news happening there? #slownewsday.”

Kim Tate was out of sorts now her ‘relationship’ with Graham has ended, but how will she react when she discovers Graham is dating Rhona?

At the end of the episode, Jamie saw Graham and Rhona kissing – but will be reveal the truth to his mum?

Elsewhere in the Dales, menacing loan shark Terry turned up to demand the money from Mandy Dingle and fake son Vinny, while Leanna Cavanagh tried to plan a Halloween party by stealing booze and snacks and brandishing a fake ID.

Do you think Graham and Rhona make a good team? Let us know on our Facebook page @EntertaimentDailyFix.