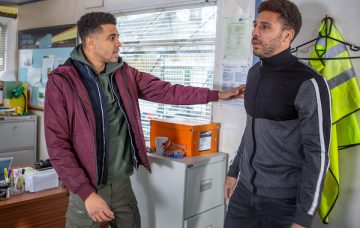 With Ellis and Jessie leaving the village will Billy go too?

Fans of Emmerdale have been left questioning if Jay Kontzle – aka Billy Fletcher – will be axed from the soap following the news his on-screen brother has been sacked.

Billy’s mum, Jessie Dingle, is also set to leave the Dales in the coming weeks, making the reasons for Billy to stick around even fewer.

Ex-jailbird Billy arrived in the village last year much to the anger of his brother, Ellis.

Despite getting involved with the wrong crowd and being in prison, Billy seems to be the apple of Jessie’s eye, and Ellis has always resented that.

The brothers finally put their differences aside recently, after Ellis was stabbed in revenge for an attack Billy was part of.

They are planning to go into business together and Billy seems to be settled in the village as he starts a fledgling romance with Dawn.

But the news yesterday that actor Asan N’Jie has been sacked from his role as Ellis after threatening to kill Hollyoaks actor Jamie Lomas at the TV Choice Awards on Monday night (September 9), throws Billy’s future into doubt.

But fans don’t want it to be the case the Billy has to leave as well and have voiced their worries on Twitter.

@emmerdale you made the right decision axing the actor who played Ellis after what happened. Please do NOT axe his brother Billy though please keep him even though Ellis is gone & Jessie is leaving. Also consider recasting Ellis #Emmerdale

Now Ellis has gone it’s a good time to get rid of Jessie in Emmerdale and her ex too. Billy can stay though….

With the mum leaving, that only leaves billy. I hope he stays I really like him. @DuncanLindsay what do you think ? @emmerdale @itvpresscentre #emmerdale

I wonder if what happened at the TV awards will affect the actor that plays Ellis’s brother. With Jessie leaving too I’m wondering how they will keep him in without his family. Would be a shame for the guy if he was written out aswell #Emmerdale

Jessie is set to leave soon after sharing a kiss with her ex, Al Chapman.

Former headteacher Jessie is hoping to get a job in Dubai, but whether that’s how she leaves, remains to be seen.

Emmerdale has yet to reveal details of how Ellis will depart after Asan’s contract was terminated with immediate effect.

Could the two head off for Dubai together?

Fans of the soap have asked scriptwriters to consider recasting the role of Ellis.

The channel confirmed they had axed Asan after crisis talks with the actor.

After the shocking news of Asan’s sacking broke on Wednesday (September 11), one fan tweeted: “Emmerdale, please recast Ellis, the actor has only been in the role a year, give another young actor the chance to take him on.”

@emmerdale please recast Ellis, the actor has only been in the role a year, give another young actor the chance to take him on.

That's not a bad shout to be fair , I know Reece is in the same charity football as Jay who plays Billy and Danny who plays Aaron so would quickly fit in to the cast.

Ellis could, and probably should be recast. The character has a lot more to give I feel, especially with them bringing in Al.

I wonder if he will be recast coz it seems like they had big plans for Ellis since they brought in his dad. I do hope they keep billy and Al. It would be unfair on them if they'd have to leave due to something that idiot did

Emmerdale usually films episodes around six to eight weeks in advance, so it will be some time before viewers will see Ellis’ abrupt exit from the village.

The “devastated” actor issued a public apology after his dismissal, saying: “My behaviour at the TV Choice Awards was completely unacceptable and very much out of character.

The actor was filmed having a violent altercation with Jamie, threatening to kill him.

Do you think Billy should stay? Leave us a comment on our Facebook page @EntertainmentDailyFix and let us know what you think!