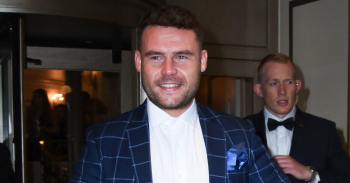 Who's excited to see them together on the show?

Danny Miller says it has been “brilliant” shooting scenes with Lisa Riley now she has returned to Emmerdale.

The 28-year-old actor plays Aaron Dingle in the ITV soap and he, along with the rest of his on-screen family, are at the centre of the Mandy Dingle whirlwind that blows into the village.

Danny has had great fun working with Lisa and some of the cast have commented that he’s met his kindred spirit in the 43-year-old actress.

In an interview with Inside Soap magazine, he said: “She’s brilliant! Someone said the other day, ‘She’s the female version of Danny Miller!’

“We got off on the right foot from the start, which bodes well for the future. I love working with her; and I love her character.”

Danny’s future storylines will see him at the centre of the Dingles’ dramas because his character Aaron’s relationship with husband Robert Sugden is coming to an end as his co-star Ryan Hawley is leaving the programme.

Danny is excited about his upcoming storylines, especially because he will be working a lot more with Jeff Hordley, who plays Cain Dingle.

Read More: Grinning Jamie Lomas is seen for the first time since Asan N’Jie threatened to kill him

He said: “It’s nice to do other things and I’m really looking forward to what’s coming up with the Dingles.

“I know I’m going to be working with Jeff Hordley again – Cain and Aaron have always worked incredibly well together.

“I’m also looking forward to Aaron having a bit of a rebellion and seeing his life unfold now he’s lost his one true life.”

Lisa previously revealed that Mandy’s goal is to manipulate her family when she gets back to the Dales and accuses the Dingle clan of going soft.

She said: “I think Mandy thinks the Dingles are all a bit settled.

“She wants to mix it up a bit and get the fight back. She might even manipulate a few of them to get what she wants, which is money!”