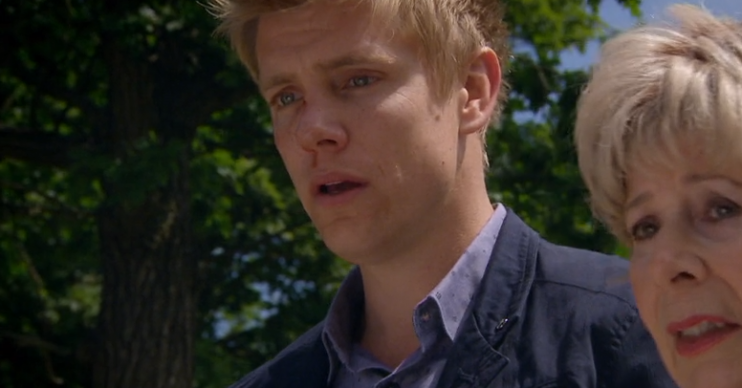 Emmerdale viewers cheered on Robert Sugden as he hit rapist Lee Posner over the head with a shovel.

In last night’s episodes of Emmerdale (July 30 2019), Victoria agreed to give her attacker the money he was demanding in return for him giving up rights to the baby, but Vic refused to give him a public apology.

Victoria’s brother gave him the £10k and would give him the other half when Lee told his mum he was giving up rights to the baby.

Vic begged Lee to admit what he did just once however, Lee said: “You know what’s scary? I actually think you believe it.

“I feel sorry for the next bloke you do this to. I mean, really I should hang on for that apology.”

As Vic went to lunge at Lee, Robert stopped her and told Lee to get out of his house.

As they stood in the doorway, Lee said to Robert: “Well that was fun wasn’t it?”

But as Robert replied: “No, no it really wasn’t,” Lee responded with: “Well sometimes no doesn’t mean no does it? Just adds to it.”

Lee then continued to make disgusting comments about what he did to Victoria: “I mean is it really rape when they love it as much as your sister did?

“And I even gave her a nice little souvenir to remember me by. Bye. Uncle Robert.”

Lee continued to wind Robert up by saying things like “your sister fought harder than this.”

When Robert told Lee he wasn’t walking away from this, Lee replied: “Oh but I am, and twenty grand richer. Baby maker, money maker, I wonder who the next lucky lady is going to be?”

As he walked away, Robert came up behind him and smacked him over the head with a shovel, knocking him unconscious.

As Rishi thought it was part of the Wild West day, he alerted the other villagers, bringing attention to the attack.

I know Robert is gonna be in trouble for it BUT Yaaas Robert, good on you for hitting scumbag Lee 👏🏼👏🏼 #Emmerdale

I think robert does one stupid thing after the other, but this? lee deserved every bit of that! #emmerdale

Caught up on #Emmerdale. Lets get one thing straight. Lee was asking for it. And anyone would have done the same. He basically told Robert he couldn't wait to do it to someone else. Robert did the world a favour. Lets just hope he never wakes up.

lee more than deserved a spade to the head.

Lee deserved that. But the idea that Robert is probably going to go to prison over Lee…. #Emmerdale pic.twitter.com/7pGEZaLywx

The cheers that went up in this house when Robert brained Lee with a shovel #Emmerdale pic.twitter.com/9c2VhYQnYU

After Manpreet attended to Lee, an ambulance took him away, but will he survive? What does this mean for Robert?

The pair ended up walking home together after being thrown out of a taxi and Victoria invited Lee into her place for a coffee.

However, as Victoria told Lee to call a taxi, he followed her into her bedroom and raped her.

A few weeks after he raped the chef, Vic discovered she was pregnant. But unfortunately the Crown Prosecution Service couldn’t prosecute Lee due to lack of evidence and he told them they had consensual sex.

Since finding out about the baby he and his mum Wendy have continued to harass Victoria about Lee being part of the baby’s life.