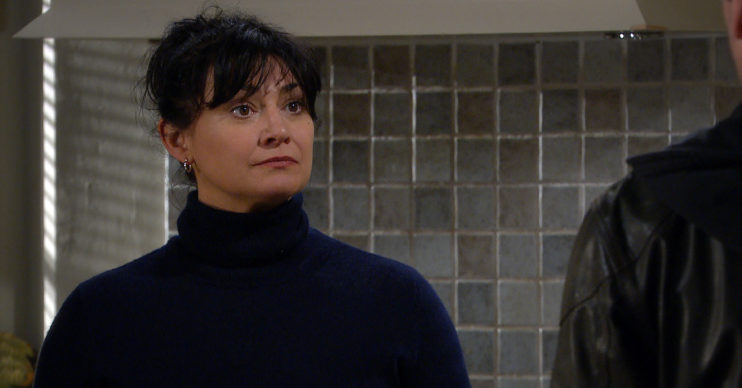 Emmerdale SPOILERS: Heartbreak for Moira on her birthday

Emmerdale fans are desperate for Cain and Moira to get back together, but every time it looks likely, something seems to get in the way.

Cain manages to really upset his estranged wife next week, but can they make amends?

It’s Moira’s birthday and feeling lonely and with divorce on the horizon, it’s fair to say she’s not looking forward to it.

Her day is brightened when Cain presents her with a card from the boys.

However, things quickly take a turn when she’s left hurt and upset by Cain’s actions. What has he done this time?

And has he done it on purpose? Or was it a genuine mistake on his part?

Moira takes her annoyance out on new business partner Rhona. Is she pushing away everyone close to her again?

What happened between Moira and Cain in Emmerdale?

Moira was feeling neglected and desperate and embarked on an affair with farmhand Nate Robinson.

Cain found out and took the pair on a boat trip, preparing to get his revenge. But he soon found out Nate was his son!

Nate had turned up for his own vengeance on the dad he believed had abandoned him. Moira was just a pawn in his game and ended up out in the cold.

Relations between Cain and Nate have thawed slightly, with the newest Dingle being welcomed into the family fold.

However, Moira has been left well and truly out in the cold. Cain asked for a divorce and although it’s not what she wants Moira agreed to give it to him.

Will Cain and Moira divorce in Emmerdale?

When the couple sat down to discuss their divorce, the easy banter they slipped back into made it clear there were still feelings there.

On Monday (May 18), they had a moment, but it soon descended into an argument over who was going to get the quad bikes in the divorce settlement.

It became very clear the argument was about more than just the bikes, but Cain couldn’t bring himself to admit he still loves Moira.

Moira broke down in tears after he left, but will it be enough to make Cain see he’s making a mistake?

Even Jeff Hordley, who plays Cain, thinks they belong together, so how much longer are show bosses going to drag this split out before giving us what we want – a Coira reunion?!