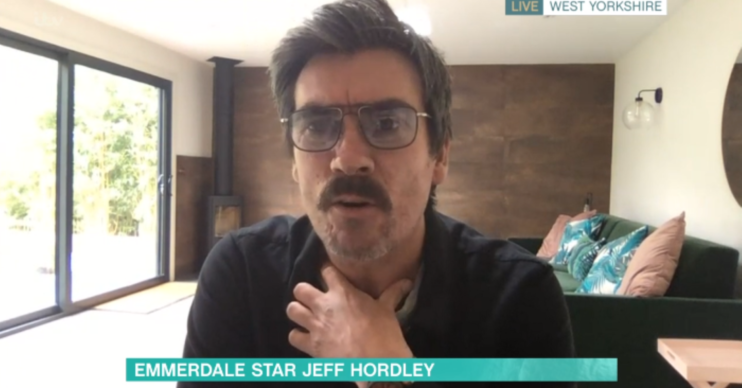 Emmerdale star Jeff Hordley has hinted at a reunion for husband and wife, Cain and Moira Dingle.

Last year, Cain and Moira split after he discovered she had been sleeping with farmhand Nate – who was later revealed to be Cain’s son.

The couple are now civil to each other for the sake of their son Isaac and Cain’s son Kyle, who Moira raised as her own.

Although it seemed that a reunion is off the cards, Jeff has give Coira fans a glimmer of hope that the pair could get back together.

On Thursday (April 30) Cain actor Jeff Hordley appeared on This Morning with hosts Holly Willoughby and Phillip Schofield. Jeff talked about his current storyline, Cain and Moira and his life in isolation.

When Holly asked the Emmerdale actor if there’s a chance of Cain and Moira reuniting, Jeff said: “I think there’s always the potential for a reunion with these two because they’re so in love, so yeah.

“And it would be nice I think, you know in these times now to see happier things on the show and show some positivity.”

Moira to save Cain from Malone?

Speaking about Cain’s storyline and his involvement with dodgy DI Malone, Moira was brought up again.

When asked about rumours that Moira could be coming to Cain’s rescue, Jeff replied: “I’ve heard that there are rumours that she might, I mean she’s got history hasn’t she? I’m hoping that she still loves him so maybe she will. Watch this space.”

What’s next for Cain and Malone?

Next week, Cain refuses to accept payment for the courier job as the drug dealer finishes putting the package into his car. Meanwhile, Billy is clearly on edge.

I think there’s always the potential for a reunion with these two because they’re so in love.

As Will prepares to complete a job, he’s horrified to learn Malone is planning on arresting Billy and Cain.

On a country road, Cain and Billy are alarmed as a police car tries to pull them over. They soon realise it’s Malone.

Read More: Emmerdale reminds viewers the timeline is out of sync after complaints over the Easter egg hunt

As he pulls them over, they glare at him, realising they’ve been set up.

The next day, the atmosphere is bad as Will hasn’t returned home. But he later falls through the door – he’s been beaten black and blue.

Later at the hospital with Will, Harriet demands answers. Will he tell her the truth?