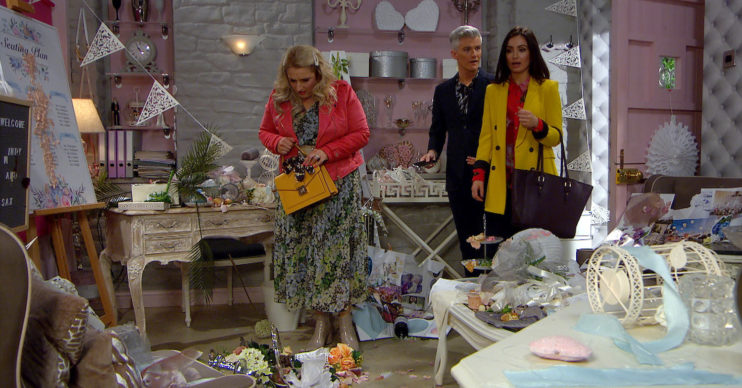 Take A Vow is trashed

Emmerdale airs the shock vandalisation of Take A Vow tonight as tensions between Leyla, Leanna and Liam reach breaking point. But was Leanna really to blame?

Leanna hasn’t accepted her dad’s new relationship at all, and she firmly believes he should be with Bernice or no one.

But with Bernice not in the picture, having moved to Australia, Liam has moved on with Leyla. He wants to be happy and really make it work, but Leanna has refused to talk to her dad at all.

Earlier this week a make-up dinner between father and daughter went wrong when Liam was with Leyla when Leanna turned up. She let them have it with both barrels.

Liam took his frustrations out on Leyla, but by Wednesday was grovelling to his girlfriend for forgiveness.

However things soon took a turn when Liam discovered Leanna and Jacob together. The doctor wrongly assumed they were about to have sex and went mad.

In fact, Jacob had been trying to persuade Leanna to make-up with Liam and was actually getting through to her. But then Liam burst in and accused her of having no self-respect.

Leanna ran off and it looked like they were back at square one.

Leyla tried to step in and help, but it only served to make Leanna more angry, and it looks like she’s about to show it.

What happens at Take A Vow?

When Leyla takes her clients to the office tonight (Friday, May 22) to make plans for their wedding, she’s shocked by what she’s greeted with.

The place has been completely trashed and looks a state.

Leyla is full of apologies and explanations, but the clients are far from impressed and make their feelings very clear indeed.

Fuming Leyla instantly assumes Leanna is to blame and seeks her out wanting answers. And things don’t end nicely…

But has she got the right person? Did Leanna really trash the place and destroy Leyla’s livelihood as a petty act of revenge?

What happens next for Leyla in Emmerdale?

Next week, Leanna is even angrier after Leyla slaps her!

But it leads to a reconciliation with Liam, and finally father and daughter reach out to each other and make amends.

However, this could have serious repercussions for Leyla and Liam’s relationship. Can they make it work after all this?