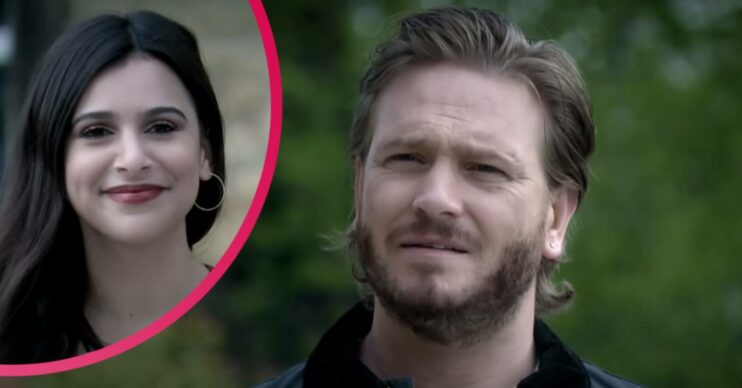 This could end very, very badly

The latest Emmerdale spoilers have revealed David Metcalfe will cheat on Meena Jutla.

David is seen betraying the volatile Meena next week on the ITV soap – and the outcome could be very serious indeed.

That’s because producers have confirmed that Meena will soon turn murderous… could David be her victim?

Emmerdale spoilers: How does David cheat on Meena?

David eventually gives into temptation as he grows closer with Victoria Sugden.

The pair bond over being parents of young children and arrange to look after their babies together.

Read more: Who is leaving Emmerdale in 2021?

However, a play date becomes more of a romantic one after sparks fly between them.

And in the heat of the moment, they kiss after David makes his move…

Consequences of a kiss

But how will the manipulative and scheming Meena react – probe to outbursts – if (and possibly when…) she finds out?

Meena’s ruthlessness and erratic behaviour is already well established within the village.

We soon learn the true extent of Meena’s narcissistic and amoral character.

However, it has also been confirmed she will soon turn killer, leaving a trail of destruction in her wake.

Will David or Victoria die?

It is currently unknown which villager will soon be departing Emmerdale for good.

Among the long list of contenders to possibly suffer Meena’s wrath are Jacob Gallagher, Leanna Cavanagh and Manpreet Sharma.

But doing the dirty on her is unlikely to mean David or Victoria are safe… and could indeed seal one of their fates.

Emmerdale boss Kate Brooks recently teased: “Meena’s seemingly caring facade belies her true persona – a woman with a murky past and no conscience.

“Her lack of empathy is often perceived by those around her as little more than spoilt petulance. However, we soon learn the true extent of her narcissistic and amoral character.”

Emmerdale continues tonight at 7pm on ITV. This week’s episodes are all available to watch on ITV Hub.

Emmerdale usually airs on weeknights at 7pm, with an extra episode at 8pm on Thursdays.