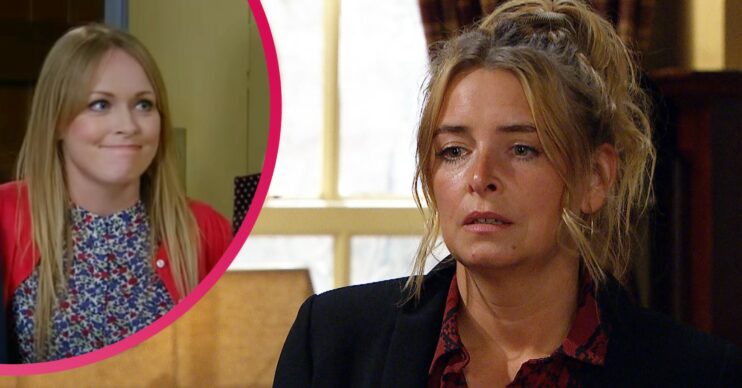 Emmerdale spoilers for next week reveal Charity is devastated when she gets shocking news about Vanessa.

Currently Vanessa is living away from the village. After splitting up with Charity, she decided not to return.

In next week’s scenes Charity overhears that Vanessa has a new girlfriend.

Hearing that her former fiancée has moved on, Charity is devastated.

In 2018, Charity and Vanessa started a relationship. .

Last year Vanessa was diagnosed with bowel cancer and told the news to Charity and her sister Tracy.

Later Vanessa left the village to go and visit her mother, who had a bad fall.

Filming started back on the soap, however Michelle didn’t return to filming.

Meanwhile in the village, Charity desperately tried to track down Vanessa’s ex Kirin, who is the biological father of Vanessa’s son Johnny, so she could adopt him.

Why did Charity and Vanessa break up?

However in October last year Charity thought Vanessa had become distant. She was worried Vanessa was going to leave her.

Upset, she ended up kissing Moira’s brother Mackenzie. But she unaware Tracy had seen the kiss.

Later, Vanessa told Charity the reason she was acting distant was because she had an appointment for another scan and didn’t want to worry her.

It turned out to be good news – Vanessa had been given the all-clear.

Vanessa planned to return to the village. However Tracy told her about Charity’s cheating, showing her a photo of her kissing Mack.

Upset, Vanessa broke up with Charity and decided to stay away from the village.