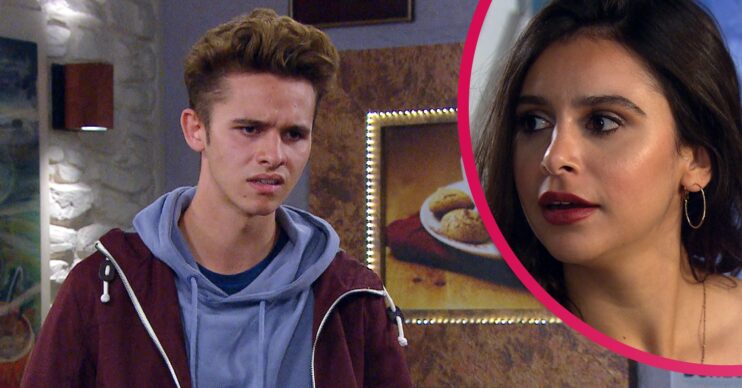 Emmerdale: Jacob is next on Meena’s ‘hit list’ fans predict

Is Jacob in danger?

Emmerdale fans have predicted Jacob will be Meena‘s next victim after she issued him a chilling threat.

Earlier this week, Victoria was discharged from hospital following the events of the disastrous survival challenge.

It had become clear that David had ended things with his girlfriend Meena and was now seeing the chef, who he has been growing closer to for months.

However not everyone was happy about the new relationship.

Meena was furious David had gone off with Vic and so was his son Jacob. Meena even began to manipulate Jacob, making him think his father was cruel to her.

In last night’s episodes (Thursday, October 28) Eric had a word with Jacob about how he was acting towards David and Victoria.

Jacob decided that he should be happy if his dad is happy and gave them both his blessing.

Emmerdale: Jacob is next on Meena’s ‘hit list’ fans predict

Later Meena overheard Jacob ordering a takeaway from him, Vic and David and wasn’t happy he appeared to forgive them.

Jacob told Meena to respect David’s decision to be with Vic, but Meena didn’t take too kindly to his advice.

Jacob told Meena to get over what happened and move on, but Meena issued a chilling threat.

She said: “I can only pray that one day you’ll find the courage to speak your truth. You know you should be careful what you wish for. Soon, you might wish you left well enough alone.

“Like I wish I left Victoria to drown in that river.”

She then blew Jacob a kiss before walking off.

Fans now think he could be Meena’s next victim.

Jacob next on Meenas hit list with any luck #Emmerdale