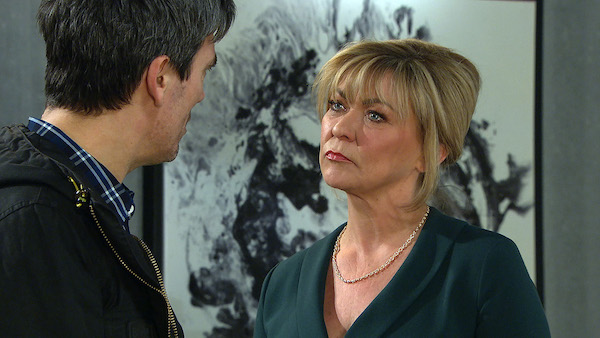 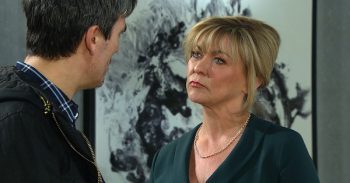 Kim Tate’s return hasn’t been a popular one for many Emmerdale viewers, with some begging scriptwriters to kill off the “pantomime villain”.

But her latest move has really set the cat amongst the pigeons.

Last night (Tuesday 19 March), Kim declared she planned to destroy Cain Dingle – even though she knows Joe Tate isn’t dead after all.

After discovering Graham had been hiding the truth about Joe, who is in fact alive and well and hiding abroad and not dead as a dodo as previously thought, Kim decided NOT to put Cain out of his misery.

Instead of letting him off the hook and telling him he’s not a murderer after all, Kim vowed to continue toying with Cain.

When Graham suggested they told Cain the truth, Kim said: “I want people around here to be reminded exactly what I’m capable of.

“It’s in both our interests to make sure no one thinks they are beyond our reach starting with Cain Dingle.

Whether she wants to kill him, destroy his life or make love and eat him after remains to be seen, but fans were NOT impressed.

Sorry @emmerdale, but Kim Tate being back has to be one of the worst moves you’ve made for a while! Naff storyline (although, go team Moira!), wooden actress and viewers wondering just how long before we give up on our favourite soap. 😔💔#shortcontractplease

I’m actually finding this return of Kim Tate rather tiresome, boring in fact, much preferred Joe in charge of Home Farm #Emmerdale

When is Kim leaving? Soon I hope because this is bloody tiresome#Emmerdale

#Emmerdale. The programme is called Emmerdale – not The Kim Tate Show.👎👎

One blasted: “Sorry @emmerdale, but Kim Tate being back has to be one of the worst moves you’ve made for a while!

“Naff storyline (although, go team Moira!), wooden actress and viewers wondering just how long before we give up on our favourite soap. #shortcontractplease.”

Another said: “What’s the point of Kim coming back?”

A third added: “Sorry to say this, but I’ll be switching Emmerdale off soon, don’t enjoy the Kim Tate storyline and am not looking forward to the impending demise of Lisa. Poor Belle has been through enough. Life is full of sadness at the moment. Give us some escapism and happy times.”

“If Kim Tate is in an episode I don’t bother watching,” agreed another. “She’s just silly and her overacting is tiresome.”

“Most annoying character ever, think I’ll take a break from watching for a while or at least until Kim disappears,” said yet another.

Many others called Kim’s return “tiresome”, “boring” and “outdated”.

In upcoming scenes, Cain and Moira find their future put on the line when she starts meddling in their lives once again.

Who will come out on top? And whose side is Graham REALLY on?

Are you a fan of Kim Tate? Leave us a comment on our Facebook page @EntertainmentDailyFix and let us know what you think!