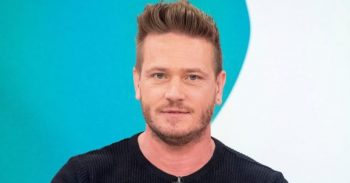 Emmerdale’s Matthew Wolfenden hits back at critics of grooming storyline

The actor has defended the soap's controversial plot

Matthew Wolfenden has stepped in to defend the controversial Emmerdale storyline, in which teacher Maya Stepney has groomed schoolboy Jacob Gallagher.

Viewers have been repulsed and sickened by the scenes, as Maya has toyed with the teenager and ultimately embarked on a sexual relationship with him.

Some fans even complained to TV watchdog, Ofcom, who are now investigating the sex scenes in question.

But actor Matthew, who plays Jacob’s dad David Metcalfe, has called out critics of the grooming plot, saying the story needs to be told.

During a recent interview, the 38-year-old discussed the strong reaction soap watchers have had to Maya – and says it proves the show is doing its job.

During a chat with new! magazine, the dad-of-two admitted that the scenes are “supposed to uncomfortable” because the soap is highlighting a real issue.

“People are saying: ‘It’s horrible, I can’t watch!’ That’s exactly my point – it’s supposed to be uncomfortable and this happens in real life!”

Matthew, who has been in Emmerdale since 2006, added: “If we do get some positive feedback then, I think it’s a good thing.”

In hellishly difficult-to-watch scenes, Maya has been having sex with the much younger boy – and Matthew’s character David nearly caught them sleeping together recently.

Producer Kate Brooks has reassured fans that the paedophile teacher WILL face justice for abusing Jacob.

She said: “We’ve got a responsibility. A lot of people watch the show, a lot of teenagers watch the show, and also we would never just tell one of these stories lightly. We have a duty to make sure the right protocol is carried out, and the right outcome.”

She also revealed viewers’ discomfort at the storyline meant it was working as intended.

Kate added: “It can make for uncomfortable viewing but I think it’s a really important storyline to tell.

“We’ve been working really closely with Barnardo’s to make sure that we get it right, and doing a lot of other people’s stories justice.

“It’s something that’s not really been touched on in soaps, it’s a tricky story to tell but we’ve managed to so far to tell it as sensitively as possible.

“We’ve worked really closely with Louisa Clein and Joe-Warren Plant and Matthew Wolfenden, and our research team and we’re all really keen to get it right.”

She also teased how the storyline won’t end quickly, and instead will run on and on.

A spokesperson for Barnado’s has said: “Sadly, thousand of children and young people across the UK are being sexually abused every year.”

Do you think this storyline is important to tell? Leave us a comment on our Facebook page @EntertainmentDailyFix and let us know what you think!