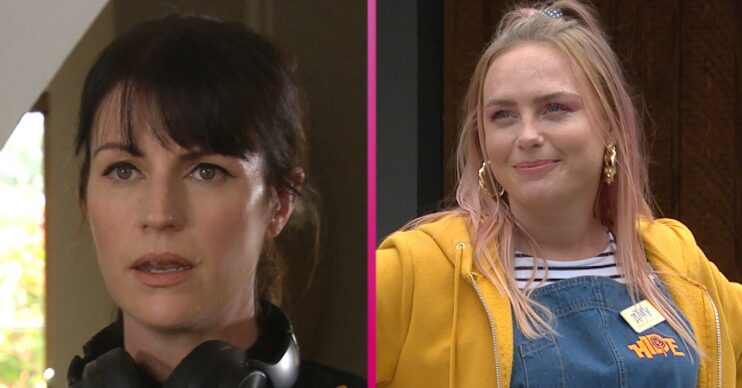 Kerry returned to screens last month and it was revealed she spent the last 18 months working for Chloe Harris’s dad, Damon. While he’s in prison, Kerry has been looking out for Chloe.

Recently Kerry moved back to the village with Chloe after Damon had her kicked out for wanting more freedom.

During her time in the village, Kerry has got her job back at the salon, got another job at David’s shop and has reunited with her daughter Amy.

Read more: Has Lucas in Emmerdale been recast? Who plays Dawn’s son now?

However fans are questioning why Kerry hasn’t seen her ex-fiancé Dan or his daughter Amelia, who sees Kerry as a mother figure.

Kerry has been back in the village nearly a month and still hasn’t told Dan and Amelia? Just like they never existed #Emmerdale

Has Kerry just swapped out one daughter for another? I mean where’s this scene with Amelia? Terrible storylining at best #emmerdale

Kerry seems to have forgotten about Amelia and Dan!! #Emmerdale

Odd not to see Kerry reuniting with Amelia… #Emmerdale

Has Kerry seen Amelia yet #Emmerdale

Kerry had an on and off relationship with Dan Spencer, however they split up in 2019.

Although they were no longer together, Kerry did end up living with him in the spare room until she left the village last year.

During their relationship, Kerry became close with his daughter Amelia.

Why did Kerry leave the village?

When filming returned, Laura Norton, who plays Kerry, didn’t return and it was revealed the character had left the village.

Soon it was announced Laura and her fiancé Mark Jordon were expecting a baby. In February 2021, Laura gave birth to a baby boy, who they named Jesse.

Meanwhile Kerry’s exact whereabouts were unknown until Charity and Mack broke into Chloe Harris’s house and found out Kerry works there.

Kerry stopped working for Damon after he kicked Chloe out.