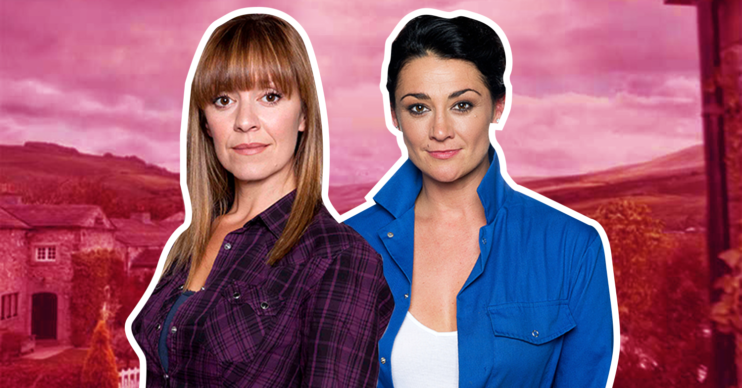 Rhona and Moira have been friends for a long time

Emmerdale fans are convinced Rhona Goskirk is falling in love with her friend and business partner Moira Dingle after spotting a hint in a recent episode.

Over the last few weeks, the two women have been working together after Rhona decided to invest in Butler’s farm.

In Monday’s episode (June 29) Moira was left feeling flattered when restaurant owner Ricky flirted with her.

In last night’s episode of Emmerdale (Wednesday, July 1), Moira told Rhona about her encounter with the businessman and asked if he acted the same with her.

When Rhona told her that she and Ricky only talked business, she began to ask questions and seemed panicked.

She asked her business partner: “In what way? I mean… Like didn’t ask you out, did he?”

When Moira said no and that she probably would have turned him down if he did, Rhona couldn’t help but look relieved.

Although some may think it’s because she’s worried about Moira finding out about her and Nate’s business deal, others think that maybe Rhona is falling in love with her friend.

After Moira realised she couldn’t take on a meat deal with Ricky’s restaurant alone, she and Rhona turned down the deal.

Later, Kim Tate took on the deal at Wylie’s farm. But Nate, who runs the place, realised it was too much work just for him.

Do not get me started on the Rhona and Moira tension.

Nate and Rhona then decided to split the deal between them. However the vet hasn’t told Moira about the deal, because Moira refuses to be around Nate, who she once had an affair with.

But could this whole situation be bringing Moira and Rhona closer together?

Do you think Rhona is falling for Moira? Leave us a comment on our Facebook page @EntertainmentDailyFix and let us know what you think of this story.