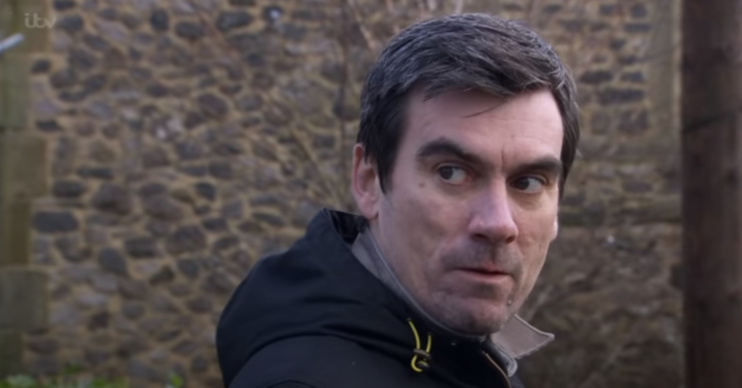 Cain thinks Malone is having an affair with Moira

Emmerdale star Jeff Hordley has teased a death plot as Cain and Detective Inspector Malone continue to go against each other.

Over the last few months, Cain, Will and Billy have been terrorised by the corrupt copper. Although Harriet got involved and warned Malone to keep away, she has since started an affair with her former colleague and he’s continued to stay around the village.

But next week, Cain is furious when he learns Malone is back. When he hears Malone has an interest in the village, Cain immediately assumes it’s Moira.

Will the two men be going head to head once again?

Recently Jeff spoke about Cain and Malone at a virtual press event and teased their clash could ‘cost lives’.

Speaking to Entertainment Daily and other media, Jeff said: “[Cain’s] got to be very wary of him.

“He’ll still have a go with him, but he knows that he’s up against it and at any time could pull one majorly over him – and it could cost people’s lives.”

A death in Emmerdale

Last month, Managing Director of Continuing Drama and Head of ITV North, John Whiston, revealed there will be a social distanced murder in Emmerdale.

He knows that he’s up against it and at any time could pull one majorly over him.

Next week, after Moira learns of Harriet and Malone’s affair, the dodgy detective warns her to keep quiet. And later, Cain gets a phone call to say his soon-to-be ex-wife has been involved in a hit and run.

On yesterday’s installment of This Morning (Tuesday, June 30), soap expert Sharon Marshall teased that Moira may not survive.

Read More: Who runs over Moira in Emmerdale? Meet the suspects

She said to Holly and Phil: “Will Moira survive? There is a death coming up, but I can’t tell you who…”

Does that mean Moira’s a goner? And who runs her over?