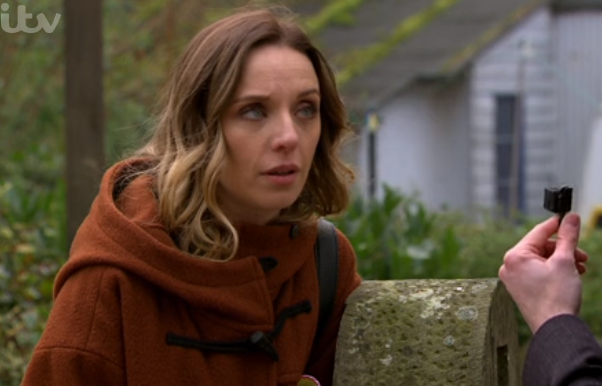 Emmerdale viewers baffled as Andrea goes to work in her pyjamas

Viewers mistook her blouse for a pyjama top

Viewers of Emmerdale were left baffled as Andrea Tate appeared to go to work in her pyjamas in last night’s episode (Monday, March 13).

Over the last few weeks, Andrea has been trying to think of ways to stop mother-in-law Kim from having access to her daughter Millie.

Andrea recently met client Nick who gave her the idea to film Kim talking about her plot to kill Graham Foster.

In last night’s episode, as she met up with Nick at her office, Andrea took off her coat to reveal a black and red cherry print blouse.

But instead of taking interest in their conversation, viewers were more concerned by Andrea’s top.

Some were left questioning why she was wearing pyjamas to work.

Why is Andrea wearing pyjamas? #emmerdale

Me: I don’t trust this fella at all. Mum: Why is Andrea wearing pyjamas? 😂 #Emmerdale

@emmerdale#emmerdale#andreadoublecross
Why is Andrea wearing pyjamas

#emmerdale ffs who goes to work in their pyjamas

Why is Andrea wearing pyjamas to work? #Emmerdale

Why does Andrea look like she’s wearing pyjamas? #emmerdale

#Emmerdale why is Andrea wearing pyjamas to work?

Soon, Andrea lured Kim to the office and tried to blackmail her into giving her £20,000 and in return Andrea wouldn’t use Kim’s murder plot against her in the custody battle for Millie.

Andrea managed to record Kim admitting to ordering Graham’s death and threatening to do the same to Andrea.

When Nick returned, they looked at the footage and Andrea was overjoyed that she finally had evidence against Kim.

But as she and Nick celebrated, they soon ended up sharing a kiss.

Why is Andrea wearing pyjamas to work?

Eventually Andrea stopped and admitted to him that she’s still in love with her husband Jamie, who she’s separated from.

Although Nick seemed like a nice, helpful, man, at the end of the episode, it was revealed he was hired by Kim and it appeared he had recorded his kiss with Andrea.

He then gave the footage to Kim, and she told her latest employee that Andrea could kiss her custody battle and Millie goodbye.

What will Kim do with the footage?

The next episode of Emmerdale airs on Tuesday, March 17 at 7pm.

What do you think of Andrea’s top? Leave us a comment on our Facebook page @EntertainmentDailyFix and let us know what you think!