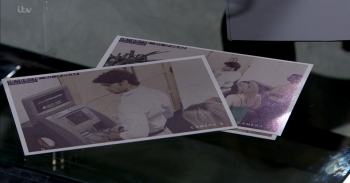 Scriptwriters addressed one of the perceived 'errors' in the storyline

Emmerdale fans were beyond happy this week, to have discovered that Joe Tate is alive and well after months of is he?/isn’t he? suspense.

Now we all know that he’s been in Monte Carlo, growing his hair as a cunning way to disguise himself from Kim Tate, who used to want him dead, but now isn’t so bothered thanks to a new interest in seeing Cain Dingle skinned alive.

Read more: Emmerdale fans threaten to boycott soap over “worst storyline in a long time” as Kim guns for Cain

And while everyone seemed thrilled to learn that Joe’s pulse is still beating (for now), even diehard fans had to admit there were quite a few unanswered questions about the plot…

Like why did Graham have a nervous breakdown after Joe’s ‘death’ when he knew he was alive all along?

In a nutshell: Kim wanted Joe dead and demanded Graham do her dirty work. But when Cain punched Joe as an act of revenge for jilting daughter Debbie at the altar, Graham saw his opportunity to kill two birds at once – frame Cain and save Joe.

However, while fans thought Graham had disposed of Joe’s dead body, he had in fact enabled him to flee abroad – never mind the head wound.

So, if Graham knew Joe wasn’t dead, why did he fall apart and relapse into alcoholism?

Last night (Tuesday 19 March), scriptwriters attempted to answer this question during a highly-charged conversation between Graham and Kim.

As the pair talked about the fact that Joe’s been alive after all this time, a betrayed Kim spat out: “Says the man who fell apart and hit the bottle even though he knew Joe wasn’t even dead!

“You must have been really pining for him. Sweet or pathetic, I can’t decide.”

Yep, that was it!

Graham just REALLY missed his surrogate son. And perhaps felt a smidgeon of guilt over Cain?

"You must have been really pining for him."

Sorry, but I'm never going to get over this! 😁

Graham drinking, despite Joe being alive, because he misses his boy like crazy! 😭

Me too, Graham. Me too. 💜#Emmerdale

Things I got from tonight's episode…
1. Graham is pining for Joe.
2. Kim knows about Joe/Graham.
3. Graham would do anything to ensure Joe's safety – even be with Kim.
4. Kim knows he doesn't want HER.
5. Graham stayed on his promise to Joe, to look after Noah.#Emmerdale

Some fans were happy with the answer, though, with one writing: “‘You must have been really pining for him.’ Sorry, but I’m never going to get over this! Graham drinking, despite Joe being alive, because he misses his boy like crazy! Me too, Graham. Me too.”

Meanwhile, Kim decided to leave Joe alone for the time being, and get her evil claws into Cain instead.

Rejecting Graham’s plan to tell Cain the truth about Joe being alive to put him out of his misery, Kim told her reluctant accomplice she plans to take Cain’s life apart “piece by piece”.

Are you glad Joe Tate is alive? Leave us a comment on our Facebook page @EntertainmentDailyFix and let us know what you think!