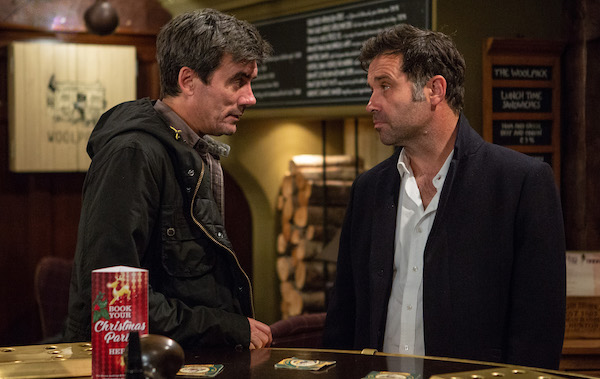 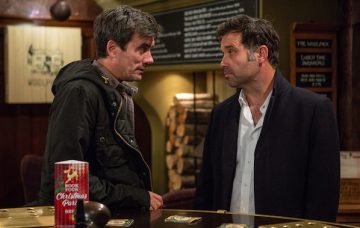 His guilty conscience is catching up with him

Tonight’s trip to Emmerdale will see a new dark twist for Graham Foster.

Kim Tate’s right-hand man has been struggling with the guilt after killing Joe Tate and, as he starts to use alcohol to numb the pain, it seems it’s only a matter of time before his deadly secret comes out.

Tonight viewers will see Debbie grow suspicious over a text that she received from Joe’s phone.

Fans will know that it’s impossible for Joe to send Debbie a text, what with him being dead and all, and it isn’t long before Graham is forced to admit it was him who sent the message.

Despite the fact Graham claims he was trying to make Debbie feel better, the news that Joe hasn’t been in touch after all hits her hard and the pair fight.

But soon the matter of Joe’s fake text message is the least of everyone’s worries when a depressed Graham makes another shocking decision after being confronted by a fuming Cain.

Still thinking that he’s the one who killed Joe, Cain will urge Graham to move on with his life and try and get a grip on reality… if only he knew why Graham was really behaving the way he is!

With Cain’s words ringing in his ears, Tuesday night’s visit to the Dales sees Graham ordering Priya to serve Debbie an eviction notice on her home.

Debbie is set to be stunned when she realises she’s being thrown out of her house, but her anger is nothing in comparison to how her dad reacts when he finds out.

With the ghost of Joe still haunting him, alcoholic Graham tries to forget his guilt by hitting the bottle, but when Cain finds out he’s not happy.

When Cain sees a clearly worse for wear Graham in the pub in tomorrow’s episode, the pair end up fighting after Cain drags Graham out of the Woolpack to confront him over his actions.

By Wednesday this week Debbie’s had enough and confronts Joe’s murderer over his bizarre behaviour.

Read more: Emmerdale to tackle child grooming as well as EastEnders this autumn?

Noah is worried about Graham and asks Debs to see if she can get to the bottom of his change in character. Debbie is only too happy to oblige, hoping it might give her the answers she’s so desperately looking for.

Is this the moment Graham is about to crack and reveal all? Or is his downward spiral continue for the foreseeable future?

Do you think Graham is about to crack under the pressure? Leave us a comment on our Facebook page @EntertainmentDailyFix and let us know what you think!