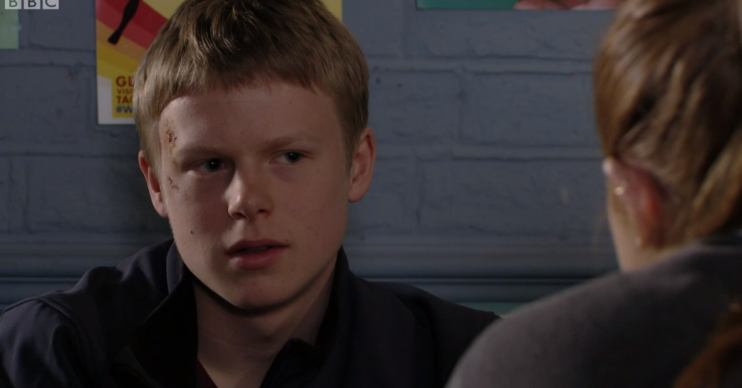 Viewers of BBC’s EastEnders have predicted there could be a love triangle on the cards for Tiffany Butcher, Bobby Beale and Keegan Baker.

A couple of weeks ago, Tiffany’s childhood friend Bobby was released from young offenders after serving three years for killing his half-sister Lucy and attacking his mum Jane Beale.

Bobby has stayed inside the house for the majority of his return, however last night Tiffany ran into her childhood friend on the street and invited him to go to the cafe with her and Bernadette.

Although he seemed tense at first, Bobby eventually appeared to relax around Tiffany and Bernie after his old friend told him about what happened to her and what she did in the past year. She told him she got through it by just fronting it out.

She also reminded him he had family and that she was still his friend.

Afterwards Tiffany noticed Keegan was in the cafe and went to talk to him about their argument last week.

Keegan asked the school girl: “Aren’t I bad enough for ya?” and she explained she had known Bobby since they were young and that he deserved a second chance.

Read More: EastEnders viewers brand Louise Mitchell ‘spoilt’ as she encourages Keanu to turn to a life of crime

When Keegan asked about the guy in the park, Tiffany explained that he was one of Evie’s mates and seeing him threw her off.

The pair eventually made up, but Tiffany didn’t tell Keegan that the real reason she was thrown by Fraser was because he had raped her.

Viewers noticed the connection between Tiffany and Bobby and have now predicted there could be a love triangle between Tiffany, Keegan and Bobby, with both lads having a crush on her.

Ah, does Bobby think he has a chance with Tiff now? #EastEnders

Keegan Vs Bobby for Tiffany is gonna be the next teen feud! #eastenders

Bobby and Tiffany meet again!
Wonder if Bobby and Keegan could be friends or enemies later on! #eastenders

Do you think there will be a love triangle between Tiffany, Bobby and Keegan? Leave us a comment on our Facebook page @EntertainmentDailyFix and let us know what you think