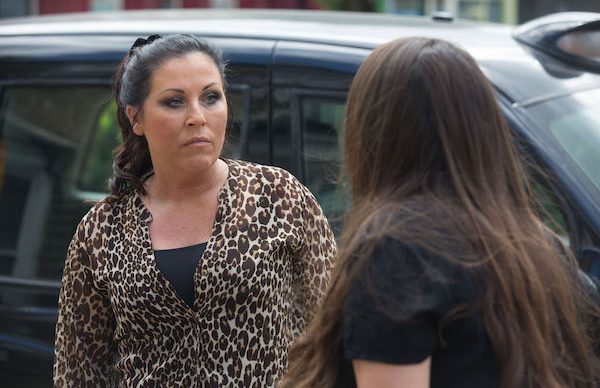 Will her plan work?

The drama between Kat and Stacey Slater reaches an all time high in next week’s EastEnders, but has Mo Harris just come up with a way to get the pair talking again?

Kat and Stacey have been at loggerheads for weeks, with the pair fighting over the fact Kush Kazemi has decided he wants to apply for joint custody of his son Arthur, who he shares with Stacey.

But with Kat dating Kush, she has found herself caught in the middle of the drama, causing her to fall out with Stacey at the same time.

However, as Kush gets a solicitor involved, it seems he’s serious about making official arrangements to see his son, and Stacey and Martin have not taken the news well.

With former best friends Martin and Kush already fighting over Kush’s role in Bex Fowler’s breakdown, their friendship hits rock bottom next week as they snipe at each other from across the market.

In the end everyone is so fed up with their arguing that Shirley Carter suggests they settle their differences with some boxing, and everyone in the market makes a makeshift ring for them to fight in.

But just as fists are being raised, Kush spots some boys stealing Martin’s money belt and he chases after them to get it back.

Martin isn’t far behind, and he’s grateful when Kush manages to get his belt back, and the pair have a heart to heart about their feud.

Thankfully, they decide to put everything behind them and they’re best friends once again – but the same can’t be said for their other halves.

As Kat attempts to make things up with Stacey, she fails once again when she asks for her cash from Alfie back.

Stacey sees red and the pair are back at square one… with Stacey taking drastic action to get rid of Kat from her life for good.

But Mo is fed up with the fighting at home and ropes Jean in to get the pair taking again.

Jean takes Stacey for a day out together, hoping to have a word with her daughter and make her see that she needs Kat in her life.

However, just when it seems Jean is getting through to Stacey, disaster strikes when they end up at the Price Albert where they bump into Kat.

The pair are soon fighting again, causing Mo to take some seriously drastic action to get them to call a truce.

Mo comes up with a huge lie in a bid to build bridges between the pair… but will her shocking plan work?

What do you think Mo will lie about to get Kat and Stacey talking? Leave us a comment on our Facebook page @EntertainmentDailyFix and let us know what you think!