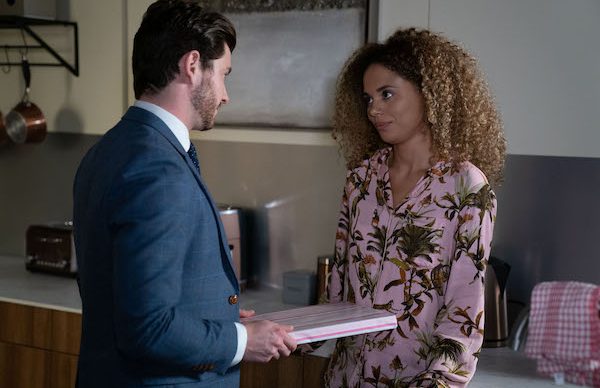 Gray has been abusing his wife

Gray tells Chantelle he is going to therapy in tonight’s EastEnders, but is he about to be caught out?

In a preview shared on the EastEnders Twitter page, it shows Gray and Chantelle in their kitchen where he makes the surprise confession.

As Chantelle gushes over Keegan and Tiffany, Gray interrupts and tells his wife he’s booked to see a therapist for the following day and that he wants to change.

Chantelle tells Gray not to change too much before they go in for a hug.

Later in the episode Chantelle accidentally cuts her hand and has to go to A&E where a nurse spots her bruises.

EastEnders viewers know that Gray has been abusing his wife.

Viewers first saw the abuse back in July after the Walford 10k.

Feeling embarrassed after Chantelle’s dad Mitch admitted he cheated to win, Gray and Chantelle went home where he punched her in the stomach.

He has continued to abuse her since, even locking her in the house so he could beat her.

However, Chantelle is now pregnant with their third child.

Shortly before she took a pregnancy test, Gray punched his wife in the stomach again for taking money out of their joint account.