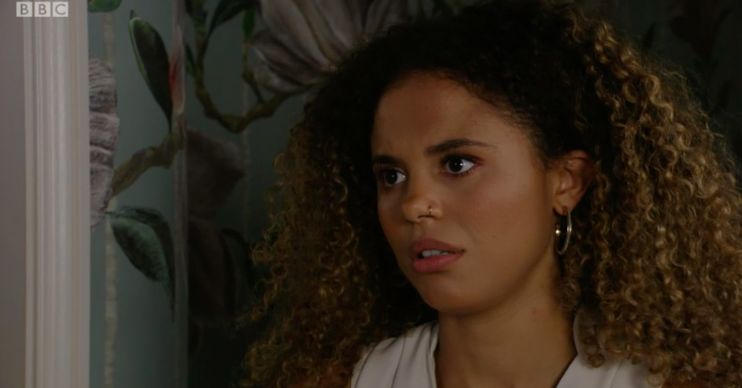 Gray Atkins locked his wife Chantelle in their house before attacking her, once he had made sure she wouldn’t see her family for almost a week.

In the episode, Gray was attacked by Chantelle’s dad Mitch for inspiring Keegan to give up sixth form college to get a job instead.

A furious row took place and it escalated into Mitch punching Gray when he called him a deadbeat dad, with Chantelle screaming at him to stop.

Throughout the episode, Chantelle was seen subtly begging members of her family to stay in the house with her so she wouldn’t be alone with Gray – and for good reason.

Once her mother Karen had no more reason to be in the house, she left and Gray took his humiliation out on a terrified Chantelle.

Viewers only saw her drop a bag of frozen peas and run after Gray locked her in the house and warned her it was “just the two of us”.

But the scene was enough for viewers to know exactly what was going to happen to poor Chantelle – and it left them horrified.

A second said: “The way EastEnders is portraying Chantelle’s domestic abuse storyline is absolutely chilling and true to real life.

“Gray was already planning the abuse when he was at the table. That’s why he said she will need a few days off work. What a vile piece of [expletive]. #Eastenders.”

A third wrote: “#EastEnders Watching the complex abuse of Chantelle by her husband Gray is harrowing. It’s challenging assumptions and shows viewers #gaslighting and #coercivecontrol.”

#EastEnders Watching the complex abuse of Chantelle by her husband Gray is harrowing. It’s challenging assumptions and shows viewers #gaslighting and #coercivecontrol. If you’re experiencing #domesticabuse, you can secretly record it with this app. https://t.co/IP26tM1RGh

A fourth said: “Those scenes tonight with Chantelle and Gray were very uncomfortable to watch.

“You could see the fear in her eyes as she really wanted her mum to stay, but couldn’t speak out. Heartbreaking #Eastenders.”

Were the scenes too much for you? Leave us a comment on our Facebook page @EntertainmentDailyFix and let us know what you think!