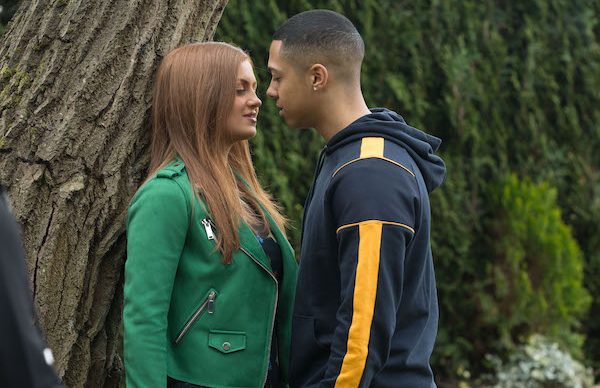 EastEnders SPOILERS: Tiffany Butcher and Keegan Baker run away to get married?

They began dating earlier this year

It looks like teen lovers Tiffany and Keegan could be running away to get married in upcoming EastEnders scenes.

According to The Sun, the cast have been spotted filming the dramatic scenes on location.

Tiffany, played by Maisie Smith, was wearing what looked to be a skintight bodycon white wedding dress which had a ruffle around the bottom hemline.

Meanwhile Keegan, played by Zack Morris, was wearing a blue smart suit with a floral tie.

According to reports, Keegan will appoint his brother Keanu as his best man and they will go to a registry office far away, out of Walford.

Both Tiffany and Keegan’s family are said to try and talk Tiffany out of the ceremony, but she won’t have it.

They all eventually give the green light for the nuptials to go ahead but the registrar claims as they’re late he won’t officiate the wedding.

Apparently, Keegan’s mum,  Karen Taylor isn’t happy with this and climbs into the registrar’s car behind him, angrily stating they have come all the way from London for the ceremony.

However when this doesn’t prove effective she climbs onto the bonnet of his car.

When the registrar threatens to call the police, Jack Branning whips out his police card and shows it to the registrar.

Has Jack saved the day? Will the wedding go ahead?