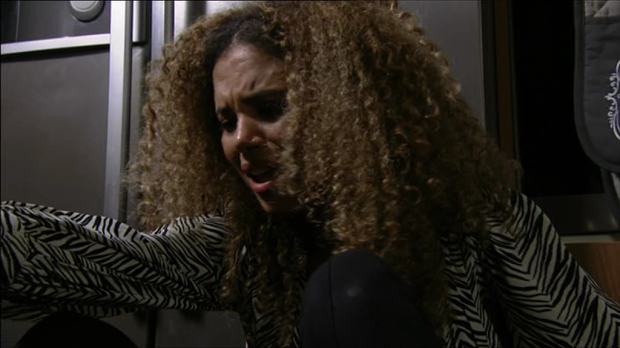 He punched her in the stomach

In upsetting scenes, he lost control and lashed out at his wife – pining her to the fridge and punching her in the stomach.

And, in an even more horrifying twist, Chantelle discovered she’s pregnant with his baby just minutes later.

On Tuesday night (September 10), the lawyer flew into a rage after attending a family party with the Taylors to celebrate Keanu having his name cleared in the assault against Phil Mitchell.

Feeling like he’d been left out, he took his frustrations out on poor Chantelle, shouting at her for taking money out of their joint account.

After his recent work trip, he returned to find his wife has regained some of the self-confidence he’s been taking from her.

Baiting her for a reaction, he soon turned nasty when he attacked her, leaving her curled up in pain on the floor.

Later, a manipulative Gray pleaded with Chantelle to forgive him, which she reluctantly did while fighting back tears.

Viewers then saw Chantelle lock herself in the bathroom to do a pregnancy test, which showed a positive result.

Will Gray’s attack have hurt their unborn baby? And, if not, will she keep the child to be bought up in an abusive household?

Those watching from home were terrified for Chantelle and feared for the life of her unborn baby.

One wrote: “Chantelle is pregnant. I bet she will lose the baby because of Gray’s abuse. Heartbreak galore coming. #EastEnders.”

Another said: “Poor Chantelle, hope she hasn’t lost the baby after tonight.”

A third echoed many others when she wrote: “My heart breaks for Chantelle.”

Oh no -pregnant – Chantelle my heart goes for you. You do know your mum will kill Grey if she knows of the abuse so go & talk #EastEnders #MSBNMph

Anyone else just cant breath when a Chantelle and Gray scene comes on? Its so tense and tragic and harrowing. 😭 #EastEnders

“Oh no – pregnant – Chantelle my heart goes out to you,” added another. “You do know your mum will kill Gray if she knows of the abuse.”

Many others begged Chantelle to leave her abusive partner, while others wanted Gray to get his comeuppance.

EastEnders fans were left stunned in July when Gray violently attacked his wife, making it clear it wasn’t the first time.

The show’s boss Kate Oates recently revealed there is a lot more to come in the heartbreaking storyline.

She said: “Chantelle and Gray’s domestic abuse story has built quite gently, but as it continues we’ll be pushing it.

“We’ve deliberately built this public perception of who Gray is and the kind of marriage they have. There’s great stuff coming up.”