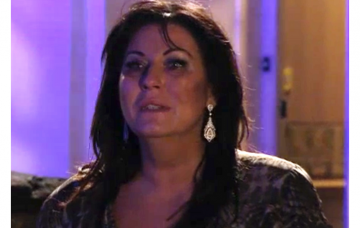 Poor EastEnders bosses have been left scrambling to write an exit for Kat Slater.

The cleaner will have to leave Walford on screen in March after actress Jessie Wallace was reportedly suspended from filming for two months.

Jessie has played Kat since 2000 when the family arrived and is set to be temporarily written out of the soap while she serves her suspension.

The Mirror reports that Jessie was ‘hauled off into a crisis meeting’ after an on-set incident, in which her ‘behaviour was called into question’.

A source told the newspaper: “Bosses were left with no choice but to discipline her.

The source added that Jessie’s scenes for the upcoming 35th anniversary special have already been filmed so bosses didn’t need to have those re-written.

It will focus on a boat party thrown for Mick and Linda Carter after the Queen Vic won the Pub of the Year award.

Jessie was pictured filming on the boat, wrapped up warm in Kat’s trademark animal print coat and spotted looking into the river.

She wasn’t one of the actors who were pictured filming in the water meaning Kat could be safe from being the major character killed off in the episodes.

An EastEnders spokeswoman declined to comment on artist’s contracts.

Jessie’s reps have been contacted by ED! for comment.

How do you think Kat should be written out? Leave us a comment on our Facebook page @EntertainmentDailyFix and let us know what you think!