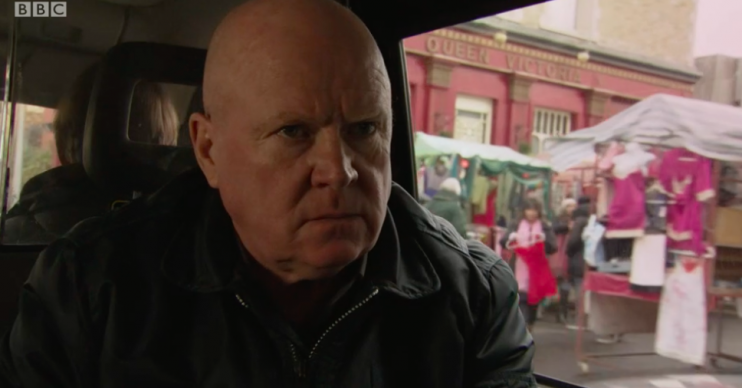 He doesn't care who knows now, it seems

As he tried to escape abroad with ex wife Lisa Fowler, their daughter Louise Mitchell and granddaughter Peggy, Phil was told son Ben wouldn’t be joining them.

Instead he needed to stay in Walford for his daughter Lexi and boyfriend Callum Highway.

But when Phil told him he was proud of him the touching moment had viewers in hysterics as Phil insisted he blame him for Keanu’s death.

Viewers were left laughing watching the episode as Phil openly admitted to the scheme to kill Keanu in the cab.

In earshot of the cab driver, Phil told Ben: “When the old bill come for you, which they will, I want you to tell them it was all me.

Sat there discussing the murder in front of the cab driver!

“You put your life on the line for me and you stepped up and I’m grateful. And I’m proud.

“I’m proud you’re my boy. You deserve to be happy so just remember it was all me.”

Viewers couldn’t believe Phil would just openly create a witness like that and it had them chuckling at home.

One said: “Phil Mitchell to Cabbie. ‘Driver, you heard the woman, drive on’. Er… he also just just heard you confess to murder, Phil.😂😂 #EastEnders”

A second laughed: “Sat there discussing the murder in front of the cab driver 😂 #EastEnders”

A third added: “And now the cab driver is number one prime witness #EastEnders”

Viewers know Keanu actually faked his own death but in the soap only Martin Fowler, Linda Carter, Sharon Mitchell and Karen Taylor know the truth.

However with more and more people discovering the truth, it’s set to explode next month in time for the 35th anniversary.

Who do you think will spill the secret first? Leave us a comment on our Facebook page @EntertainmentDailyFix and let us know what you think!