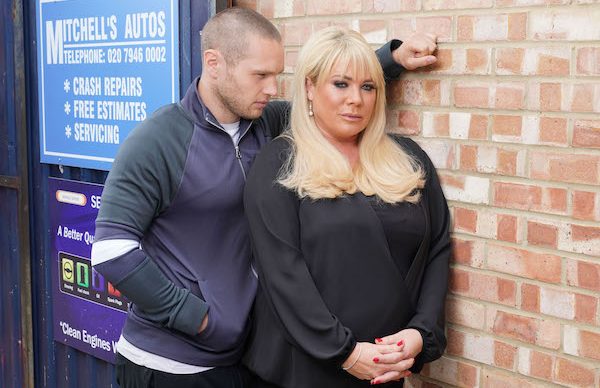 Things will take a different turn

Kate Oates has said the reveal of Sharon’s affair in EastEnders will not play out the way viewers might expect.

The show boss has already confirmed Christmas will be a big time for the Mitchells as Sharon and Keanu’s explosive secret comes out.

But now she’s revealed in an interview with The Sun Online that we’ll ‘never guess’ the fall out.

She said: “What I like about it is all of the fall out, if I asked you to guess the fall out now, you wouldn’t guess what we’ve got.”

Viewers have seen Mel on the warpath following the death of her killer son Hunter.

She blames the Mitchells and wants revenge – starting with Sharon after Mel discovered Keanu was the real father of her baby, not husband Phil.

Kate said: “[Mel] does [want revenge] and because she’s very driven and bitter, Sharon needs to watch her back.

“That’s a really big drive through autumn, and then it’s going to be a massive story at Christmas.”

Keanu then got together with Sharon’s stepdaughter Louise, got her pregnant and now they’re engaged.

But during a short break from Lou, Keanu and Sharon hooked up one more time – an momentary union that resulted in Sharon’s second miracle pregnancy.

As well as being in her late 40s, Sharon was once told she couldn’t have kids.

She fell pregnant with Denny and moved to LA to have him, and now she’s got lucky (or unlucky depending on how you look at it!) once again.

Read more: EastEnders fans predict Keanu will be killed off at Christmas

Phil and Louise have no idea that their respective other halves are having a baby together – and even though Kate has said it won’t go the way we imagine, we can safely say the fallout will be massive.

Earlier this month, Kate said it would be another drama-filled festive season in Walford

Speaking to Metro.co.uk, she revealed: “Of course, in true EastEnders tradition, Christmas is huge.

Are you looking forward to the affair reveal? Leave us a comment on our Facebook page @EntertainmentDailyFix and let us know what you think!