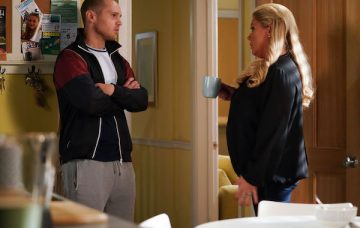 Things are hotting up between the Walford pair

A new trailer released by EastEnders has revealed a first look at Sharon Mitchell and Keanu Taylor’s new shock affair.

The pair have been flirting for months, but it looks like the rumours that the pair are set to embark on a secret romance could be true.

The short trailer from the BBC soap reveals the pair getting flirty as Keanu strips off after getting wet from fixing Sharon’s kitchen sink.

Viewers can then see the mechanic later comforting Sharon in The Arches where she is upset after a fight with husband Phil.

Read more: Could Little Mo be returning to EastEnders?

But Keanu is deadly serious when he tells her: “I think they’re both very lucky to have you.”

As the pair chat alone in the garage, Keanu can even be seen taking Sharon’s hand and the pair definitely share more than a few meaningful looks.

But things are clearly not going to be plain sailing for the pair, mainly because Keanu just so happens to work for Mr Mitchell.

And let’s face it, Phil isn’t a man you want to find yourself on the wrong side of.

These scenes are set to air later this week as the gang drama surrounding Sharon’s son Dennis continues.

Keanu has found himself caught up in the trouble thanks to the fact he caught Dennis hiding stolen mobile phones and drugs in a rucksack in The Arches for the gang.

But when Sharon starts to worry about her son being caught up with the wrong crowd, it is Keanu who is there to offer her a shoulder to cry on, bringing the pair closer together than ever.

Phil even unwittingly brings the forbidden couple closer together when he sends Keanu round to the Mitchells’ to help fix their broken sink.

Sharon and Keanu team up to sort the problem, but when things get soggy, Keanu is forced to strip off, leaving Sharon more than a little bit flustered!

But if this is a romance that is set to happen, what will Phil make of the whole thing when he finds out?

We wouldn’t want to be in Keanu’s shoes when he does.

Do you think Sharon and Keanu make a good couple? Leave us a comment on our Facebook page @EntertainmentDailyFix and let us know what you think!