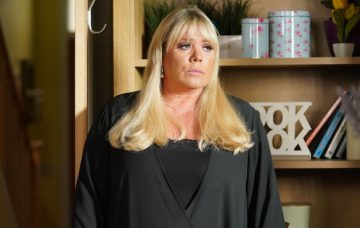 But who's the daddy?

Sharon Mitchell is about to get one of the biggest shocks of her life in EastEnders when she discovers she is pregnant, say reports.

After months of speculation, it looks like fan theories were correct – Shazza is up the duff, duff, duff.

According to The Sun, the veteran character – played by Letitia Dean – will become pregnant at the age of 48.

And it’s NOT necessarily her husband Phil Mitchell’s baby.

Instead, the pregnancy could be the result of her steamy affair with Keanu Taylor.

When Phil discovers the baby may not be his, the fiery mechanic is said to “go on a bloody rampage”, while Sharon’s age will also bring its own complications about whether the baby will be healthy and viable.

Will Sharon keep the baby? And will she stay with the daddy?

Viewers know that Sharon and Keanu rekindled their affair recently when they gave in to their feelings for each other during nookie in the Arches.

And as the pair enjoyed ‘make-up’ sex, some fans – rightly, in turns out – jumped to the conclusion that the dalliance would result in a pregnancy which could tear Walford apart.

Just this week, the BBC soap confirmed the return of volatile Lisa Fowler, Phil’s ex and mum to pregnant Louise.