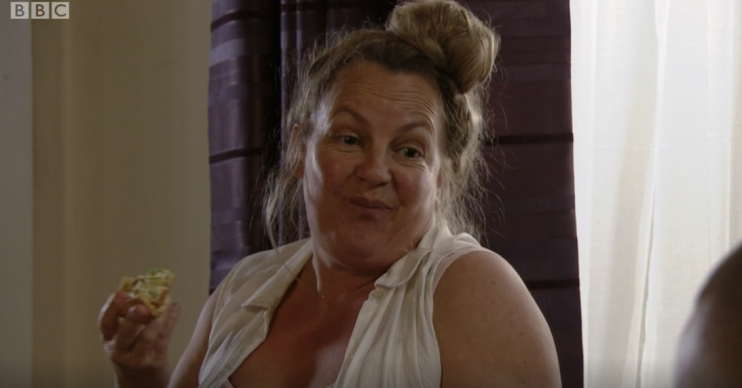 Fans of EastEnders love ‘hilarious’ Karen Taylor after she announced she was in a relationship with a woman.

In last night’s episode (July 23 2019), the Taylor family were shocked when their matriarch told them she’s in a relationship with another woman named Caren.

Her family were worried that Karen may be pregnant when she asked them all to come over but were relieved when she announced she was seeing someone.

However, when she revealed she was dating a woman, some of her family members were left confused.

At first her family members thought she was referring to herself in the third person but she cleared things up saying: “Yeah, Caren with a ‘C’, the name of my girlfriend. I’m a lesbian now,” before happily biting into her food.

Whilst daughters Chantelle and Bernie were pleased for their mum, Keegan was upset by the new relationship saying: “All our lives have been wrecked by your rubbish boyfriends, for what?”

Viewers however loved the scene and supported Karen branding her ‘hilarious’.

Karen is a queen #EastEnders

karen cracks me up seriously lorraine stanley really has made karen her own “caren my girlfriend, i’m a lesbian now.” #eastenders pic.twitter.com/DXqQoIMrWj

I love Karen way too much 😂😂😂 #EastEnders

Karen coming out as lesbian 🤣 #Eastenders

Karen "I'm a lesbian now" me after a moment's thought??? 🤔#eastenders pic.twitter.com/1yXootqowA