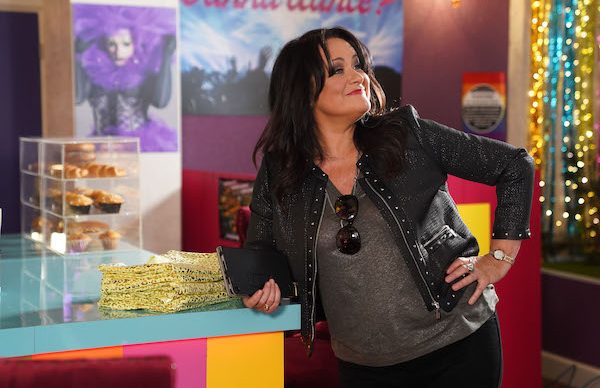 EastEnders’ Karen Taylor is getting a surprising new love interest – a woman called Caren and the actress behind her has a very famous family.

Former The Royal star Amy Robbins plays tailor Caren in the show and has been seen getting closer with Karen ever since they shared a moment at Pride last week.

But eagle-eyed fans will have noticed that Amy comes from a legendary British acting family.

She is the younger sister to Phoenix Nights star and stand up comedian Ted Robbins and Spitting Image voice actress Kate Robins.

Amy is also the aunt of I’m A Celebrity… Get Me Out of Here winner Emily Atack, but she is related to one of the true worldwide A-list stars in the form of a Beatle.

Sir Paul McCartney is her first cousin lending yet more talent to the super famous family.

As well as her role on EastEnders, Amy also played Scott Drinkwell’s mother Lynette on Hollyoaks and Rachel James in Casualty.

And while off-screen she is practically celeb royalty, Amy has made quite the impression on soap fans despite only having a few scenes.

Just finished recording the last episode of this series of #celebritygogglebox
with @emilyatackofficial . Such a good laugh to do:) pic.twitter.com/uy3JFSPvKR

EastEnders fans have called for Caren to be made a permanent character after her first scenes just flirting with Karen Taylor.

One wrote on Digital Spy: “I’d certainly welcome her to stick around.”

A second said: “I don’t really see much there in terms of her romantic connection with Karen but she seems like she could be a good character in her own right given the right development.”

A third tweeted: “Please keep Caren with a ‘c’ on the square and move her in! #EastEnders”

Another wrote on Walford Web: “I really, really, REALLY like Caren with a C. Amy Robbins gave one of the most natural debut performances of any actor in this show for a very long time.”

Do you want Caren to stay in Walford? Leave us a comment on our Facebook page @EntertainmentDailyFix and let us know what you think!