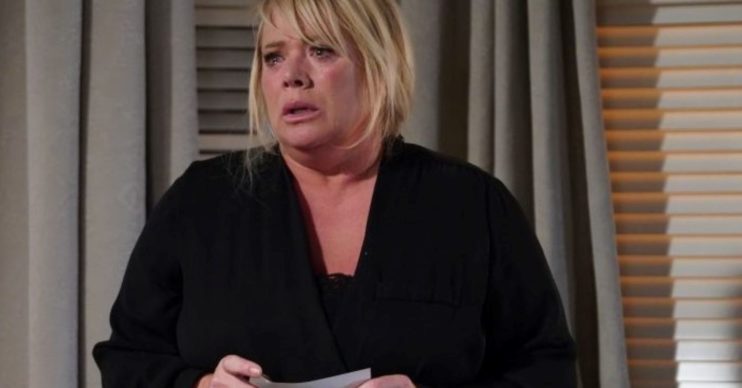 EastEnders SPOILERS: Sharon returns – and wants her baby back?

Has she made a mistake giving Kayden away?

EastEnders stalwart Sharon Watts will return to Walford next week and it’s clear she’s struggling with her decision to give up her baby.

After a trip to visit best mate Michelle in Australia, Sharon is back home on Monday, May 25. Her return floors Phil, who wasn’t expecting her – and is about to take part in a dodgy job.

It’s clear Sharon is struggling being back on the Square, plagued by memories of son Dennis after his tragic death earlier this year.

She visits Linda and tells her friend she wants to give things another go with Phil. Linda gives her her blessing and the go ahead to buy The Vic with Mr Mitchell.

Sharon and Phil have a celebratory drink, but it gets too much for Sharon when Billy and Karen arrive.

She heads upstairs to help Linda start packing her belongings, but when they come across some of Dennis’s stuff, Sharon’s emotions overwhelm her. It’s not long before the truth comes out: she’s questioning her decision to give Kayden up.

Sharon gave birth to Kayden on the day Dennis died. Having lost one son, she couldn’t cope or bond with another one and made the utterly desperate decision to give Kayden to his paternal grandmother, Karen.

Sharon’s friend Ian Beale has paid Karen to leave Walford so Sharon doesn’t have to see Kayden every day, but as the time to go approaches, will Sharon to able to let them leave?

Not wanting to admit to her true feelings, Sharon tries to distract herself. However, when she drops off some leftover baby items at the Taylors’ Karen asks her to looks after Kayden for a while.

The exhausted mum ends up falling asleep with Kayden in her arms, and Karen soon reminds her it’s not too late to change her mind.

The future for Sharon in EastEnders

Sharon brushes her off, insistent she’s made the right decision. She rushes off to seek support from Ian, but will she get it?

At the Mitchells’ later on, Sharon and Phil look to their future as a couple. But is just the two of them what Sharon really wants?

And how will Phil react if Sharon decides she can’t live without Kayden? Given the child isn’t Phil’s, can he accept it and bring him up as his own?

Or will this drive a permanent wedge between Mr and Mrs Mitchell that can never be repaired?

EastEnders airs Monday at 8pm and Tuesday at 7.30pm on ITV.