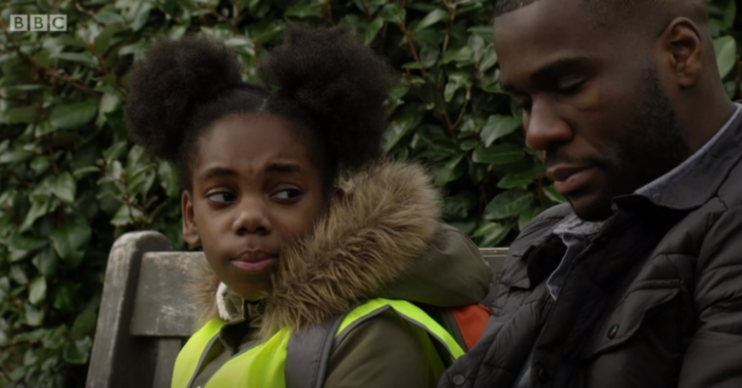 EastEnders fans have branded 10-year-old Bailey Baker ‘the most mature’ character in the soap after she gave Isaac advice.

Bailey arrived in Albert Square last year and during her short time on the show, she has already been dealt a lot of heartbreak.

But going through so much has clearly made her a wise young girl.

In last night’s episode of the show (Monday, May 18) Bailey found her teacher Isaac drinking on a bench in Albert Square, when he was meant to be off work sick.

Isaac ended up opening up about his dad and admitted to Bailey he discovered the man he thought was his father, wasn’t his biological dad.

But Bailey told Isaac that he had all those years with his father.

When Isaac admitted it was a shock finding out he has two dads, Bailey used her own experience with her late biological mum Dinah and Karen, who has taken care of Bailey since Dinah’s death.

She said: “I like having two mums… When mum died, I got Karen. A second mum. And now you’ve got two dads. So like I said, lucky you.”

Fans were impressed by Bailey’s ability to give such good advice and branded her the ‘most mature’ character on the show.

Bailey is probably the most mature person in #EastEnders

"I'm the adult, You're the kid!" – I take it you haven't met Bailey, Issac. She's the only sensible one on the Square! #EastEnders

Why is Bailey the only one with her head screwed on straight? #EastEnders

Bailey is very wise. We should all #BeMoreBailey. #EastEnders

Before Dinah’s death, Bailey was a carer for her mum, who had Multiple Sclerosis.

After being introduced to her half-brother Keegan, his mum Karen and Karen’s other kids, Bailey wasn’t on her own when it came to taking care of her mum.

What EastEnders storylines is Bailey currently involved in?

Most recently, Karen was left to care for her grandson baby Kayden after his mum Sharon rejected him. Sharon has been dealing with the death of her eldest son Dennis.

Bailey is probably the most mature person in #EastEnders.

Sharon’s best friend Ian has been trying to get Karen to move away with the baby so Sharon doesn’t have to see him everyday.

Read More: EastEnders to air special episode for Ben Mitchell as he struggles with deafness during dangerous job

Next week, Sharon returns home from her trip to Australia. However it’s clear she’s struggling being back on the Square.

She tells Linda she wants to give things a go with Phil and Linda gives her her blessing to buy The Vic.

Sharon later helps Linda start to pack up the pub. But she comes across some of Dennis’s belongings.

It’s soon clear Sharon is questioning her decision to give up Kayden. Will she get her son back?