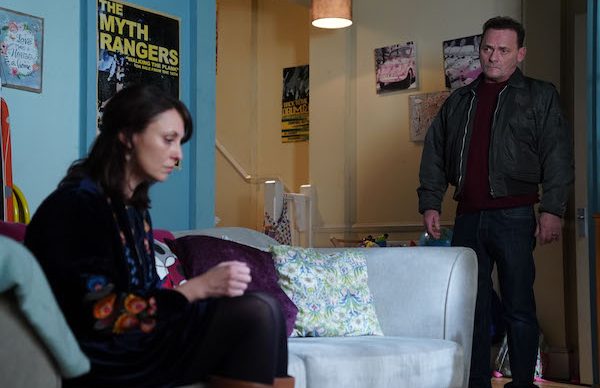 Are her troubles only just beginning?

Honey Mitchell finds herself taking a pregnancy test in next week’s EastEnders after panicking that she could be having former boyfriend Adam Bateman’s baby.

EastEnders fans have watched Honey struggling since she finally faced up to the fact dentist Adam was no good for her, before confronting him about his cheating in the middle of the pub and throwing him out on the street.

But while she might have got the upper hand by kicking two timing Adam to the curb, Honey’s long-term eating disorder has taken a grip and she is struggling to hide it from her nearest and dearest.

Her ex Billy Mitchell has noticed Honey isn’t herself and is fighting to try and help her… however, soon Billy watching her every move is the least of her worries when Honey thinks she could be pregnant.

Honey is distraught when Habiba mentions the fact it is six weeks since Adam left, and as a horrible realisation dawns on the shop worker, she races off to get a pregnancy test.

When Ash catches her with the test, she is forced to cover, but not a lot gets past Ash and soon she is cornering Honey to make sure she takes the test and gets some answers.

Meanwhile, an oblivious Billy is still worrying about how he can help his ex with her eating disorder and when he finds evidence of her not eating, he goes to extreme lengths to make her realise what is happening.

But Honey doesn’t take kindly to Billy’s interference and makes a huge decision about her future.

However, it is only when Honey realises her actions are having an impact on her daughter, Janet, that she gets the wake up call that she so desperately needs.

As she struggles to eat in front of Janet and Will, Honey realises that Billy was right all along and breaks down to Billy, admitting that she needs professional help.

Is this the start of the road to recovery for Honey?

Or is she about to discover she’s got the complication of a baby to add to her troubles?

Do you think Honey is pregnant? Leave us a comment on our Facebook page @EntertainmentDailyFix and let us know what you think!