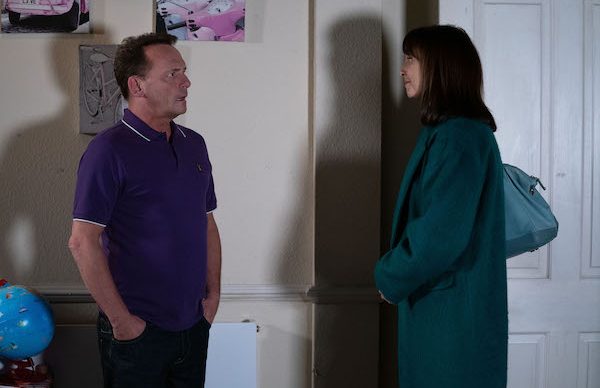 Billy Mitchell finally discovers the secret eating disorder that Honey Mitchell has been desperately trying to keep hidden in EastEnders, but will he be able to help her?

Honey has been through the mill recently, with cheating boyfriend Adam Bateman doing the dirty on her left, right and centre.

But eventually she found the courage to confront him before throwing him out on the streets.

However, while everyone is proud of her for getting rid of the man who didn’t deserve her, the stress of what has been happening hasn’t helped her secret eating disorder and she is starting to struggle.

The fact that she has now had to move in with her ex, Billy, with their kids is just adding to her stress… and sadly her coping mechanism is food.

However, it seems Billy will take just a few weeks to work out something that Adam never cared enough to address with Honey, and early next year Billy will confront Honey about her eating disorder.

With Billy now moving on with new love Karen Taylor, Honey is reluctantly singe and not very ready to mingle… but when Mitch Baker asks her out on a date she agrees.

However, the whole thing is a total disaster when Honey just orders a salad and Mitch – who isn’t known for his tact – quizzes her about why she isn’t eating much.

Later Honey is left devastated when Mitch talks to Bernadette and Bailey about her and she happens to overhear everything. But will this push her to an even lower point than she was at before?

After an incident at Janet’s beauty pageant, Billy struggles to hide his worry about Honey, and later Lola is surprised to catch him researching eating disorders on the internet.

As Lola quizzes him, Billy is forced to reveal his fears about Honey and he eventually realises his ex wife needs some serious help.

But as Billy blames himself for not noticing sooner, will Honey let him help her confront her troubles and get the support she so desperately needs?

Would you like to see Billy and Honey get back together? Leave us a comment on our Facebook page @EntertainmentDailyFix and let us know what you think!