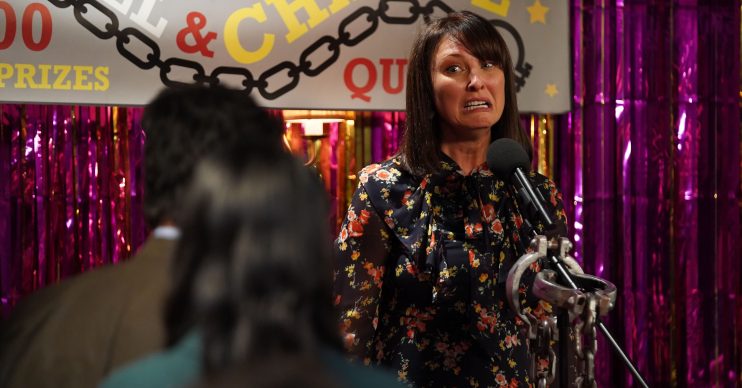 Honey Mitchell will finally confront cheating Adam Bateman in this week’s EastEnders – but how far will she go to punish him?

Adam’s lies are beginning to catch up with him tomorrow night (Tuesday December 3) and as he tries to keep all of his plates spinning, he lies to Iqra to cover his back before cancelling plans with Honey.

But Honey can’t be fooled and knows full well what her other half is up to.

She distracts herself by helping Mick at The Vic, however when Iqra mentions Adam’s secretary ‘Sally’ Honey’s facade cracks as she knows he doesn’t have a secretary.

During the ‘Ball and Change’ quiz later on, Honey fires questions at Adam and he quickly realises she’s onto him.

He tries to deflect and change the subject, but then he makes another huge error…

Honey spots Adam flirting at the bar and she’s had enough.

It’s the final straw in his long line of deceptive behaviour and Honey decides to take matters into her own hands.

As she emotionally stands up on stage, Adam tries to stop her, but Honey has something to say.

How will she exact her revenge on her cheating other half?

Adam’s latest betrayal is the latest in a long line of heartbreak for Honey at his hands.

She has known for months he was sleeping with Habiba, but she turned a blind eye to his behaviour.

Even his former foster mother Mariam Ahmed asked Honey to forgive Adam after he manipulated Mariam into believing she was partly to blame for the way he’d turned out.

Honey has developed an eating disorder as a result of her treatment at Adam’s hands.

Last week, wife swap partner Ash Panesar spotted something wasn’t right with Honey and encouraged her to open up.

She even helped her pick out a flattering outfit to boost her confidence, but when Adam’s response left a lot to be desired, Honey sunk lower than ever.

Now she’s finally found her inner strength, can she move on?

Or will she take cheating Adam back again?