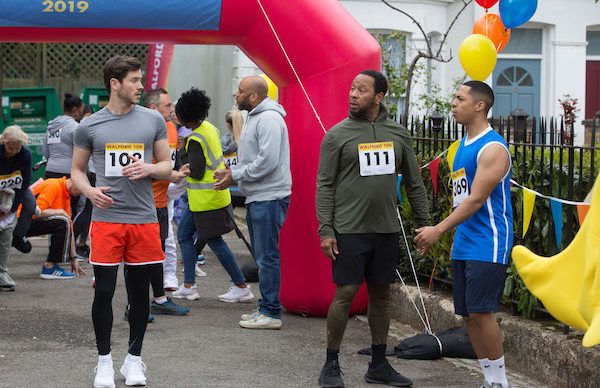 Ever since Mitch met his son-in-law, he’s been less than impressed with his smooth-talking ways.

But while he might be jealous of his daughter’s successful other half, it seems next week the pair are set to become more estranged than ever.

As Mick, Chantelle and Gray announce their plans to hold a 10k race in Walford in aid of charity, running fever hits Albert Square and Gray manages to charm half the locals into signing up.

But when Mick reveals to Linda that the plan is to raise the money for them to afford a private assessment for their son, Ollie, he’s shocked when she’s less than impressed with his idea.

However, while Linda continues to act out of character while she worries about Ollie’s potential autism diagnosis, Gray uses the charity race as a way of antagonising Mitch.

While Gray successfully manages to get his father-in-law to sign up for the race, Chantelle decides to drum up publicity by getting a photographer to come along to the event and take pictures for the local paper.

But when she gets caught up chatting to Whitney about weddings, she misses their call and the chance to get Albert Square in the local press is lost.

Chantelle breaks the news to Mick that the fund-raising event won’t be in the paper after all, but Shirley comes to the rescue and manages to find a photographer friend to come along and take the snaps instead.

But while Shirley might have saved the day, the photo call doesn’t quite go to plan and Linda is left upset once again.

When race day arrives, the competition heats up between Mitch and Gray, and the pair show their competitive side as they taunt one another about who is going to win.

As Linda announces there is a special offer behind the bar for all medal holders, Gray is convinced he is going to beat Mitch to the finish line.

The race gets underway and everyone battles it out to run the 10 kilometres to the end… and it seems like Gray is going to win by a mile.

But just when it looks like victory is his, Mitch speeds past him and makes it to the finish line first.

It’s not long before Mitch confesses he cheated in the race, giving the event all the wrong kinds of publicity.

But it’s not the newspapers that Gray is worried about, he’s fuming that Chantelle’s dad would do something so underhand and storms away from the celebrations.

Is this the final straw in the pair’s already fractured relationship?

Do you want to see Gray or Mitch win this battle? Leave us a comment on our Facebook page @EntertainmentDailyFix and let us know what you think!