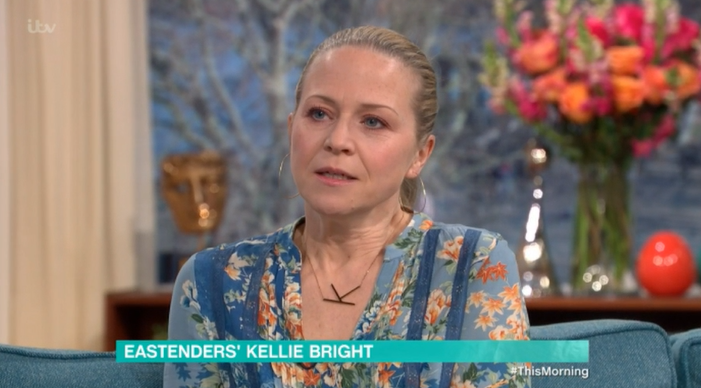 She took it very seriously

The story of Linda Carter’s alcoholism in EastEnders has had fans singing the praises of actress Kellie Bright over her performance.

And the star has now revealed the dedication she put in to getting the part right.

Speaking to Phillip Schofield and Holly Willoughby on This Morning, Kellie admitted she’d done several things to get into character.

Read more: EastEnders star Danny Dyer says he has one testicle the size of a jacket potato

“I was terrified, as well as being excited by the storylines, I have to say I was terrified because it’s really exposing, you’re really vulnerable, it’s a bit like running around with no clothes on,” she explained.

“SoI knew I had to do a lot of work before I came in to film the scenes, so I did some research… I went to my caravan in Cornwall and I drank quite a lot and filmed myself!

“What was amazing about that is you could see the alcohol hit me in waves as it was coming into my bloodstream, I’d repeat myself all the time and say the same things, then I’d forget. I was waiting to watch Strictly on the telly and I missed the whole thing.

“It was a fascinating and very helpful exercise.”

She also admitted she colour-coded her script!

Because the soap films out of order, Kellie had to work out how drunk she was meant to be at each point in the script, so developed a coloured system to get it right.

“I took my contact lenses out as well because without them I can’t see anything!” she said.

Phil and Holly then asked Kellie about the 35th anniversary, which is coming up later this month.

I went to my caravan in Cornwall and I drank quite a lot and filmed myself!

“It is the most epic week that I have ever been involved in. I’ve been on the show six and a half years and I’m really excited about seeing it.”

Holly tried to get some little tidbits of information out of Kellie about what might happen, but she kept her card close to her chest.

“I can tell you that it’s centres around, there is a party on a boat on the Thames and I get wet…”

Phil added: “We also know that the grim reaper stalks that boat, so someone dies, but you’re still talking about the show, so it’s not you?”

Linda’s husband Mick Carter has been rumoured to be the person who drowns, but actor Danny Dyer has since said he wants to stay on the show for 10 years.

Bex Fowler actress Jasmine Armfield has announced she is leaving and speculation is rife Bex will meet her maker.

But we’ll have to wait until the episodes before we find out who’s breathed their last.