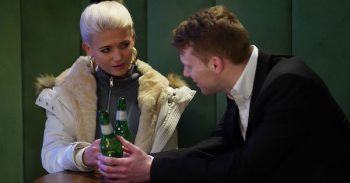 Are they being underused?

EastEnders viewers have begged the BBC soap to write a decent storyline for characters Lola Pearce and Jay Brown – or write them back out again.

Disgruntled fans have claimed the characters are being underused and have questioned why they were bought back to Walford in the first place.

Soap fans know that Lola returned to Albert Square as part of boss Kate Oates’ big plans for the soap.

She came back alongside daughter Lexi and Ben Mitchell – who hasn’t been short on stories in the months he’s been back.

At the time, senior executive producer Kate said that she “admired Lola’s fiesty, fiery spirit” and looked forward to her return. She added that the soap would create storylines for the characters related to Lola, including Jay and Billy.

However, some fans believe Danielle Harold’s character has been wasted.

Writing on Digital Spy Forums, one said: “Jay and Lola need a big joint storyline. They are both underused and need a big plot that brings both their pasts together in the present day.”

Another user replied: “Lola needs to be written back out, utterly pointless return, I agree on Jay.”

A third added: “I disagree about Lola. The character needs a big storyline but, if they can’t be bothered with that, then yes they need to let go of her because so far this return has been pointless.”

“I was so happy to see Lola back, but her return has been massively underwhelming so far,” said one more. “She’s just background to Ben’s dramas.

“So yes, give her a storyline of her own or one with Jay and I’d welcome it! It’s ridiculous that episode after episode features the appalling Keanu yet Jamie Borthwick’s Jay is sidelined.”

Another agreed, writing: “It’s not the actress’ fault the return isn’t working, it’s that genius of a producer who decided to bring her back and do nothing with her.

“So much for every character has a purpose and not bringing back people for sake of it.”

One soap fan had a great suggestion, saying: “This is my idea. There is a new manager at the E20 and he brings his wife… Leanne – Lola’s mother.”

Viewers know that Billy’s granddaughter Lola was abandoned by her mum when she was just three.

She was eventually taken into care when she was nine.

Fans were thrilled earlier this year when Lola reunited with her on-off boyfriend Jay. But what’s next for the couple?

Would you like to see Lola and Jay get a juicy storyline of their own? Leave us a comment on our Facebook page @EntertainmentDailyFix and let us know what you think!