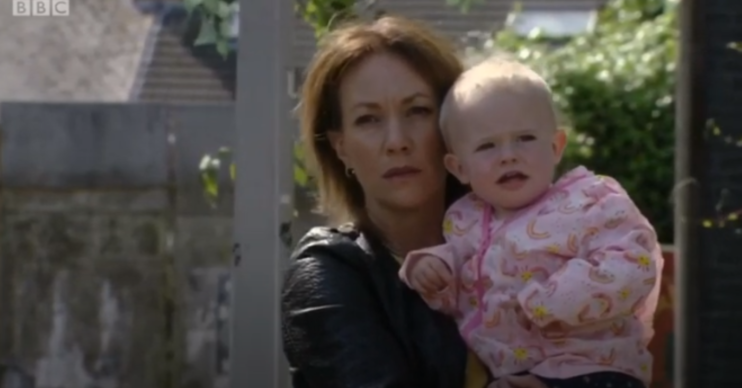 Abi is the daughter of Abi Branning and Steven Beale

EastEnders fans have been left questioning where baby Abi is as she hasn’t been seen on-screen in months.

By the time she was born, Abi Branning Jr had already lost both parents and eventually went into the care of her grandad Max and great-aunt Rainie, who married to gain custody of the child.

While there have been many arguments in the past over who Abi should stay with, it looks like she has been spending time with both Max and Rainie, who have since split.

But after finding out Rainie is now engaged to Stuart, Max refused a divorce not wanting Stuart around his grandchild due to his past.

However Stuart fought his corner claiming he would do anything for Rainie and Abi.

The sudden mention of the little girl left viewers wondering where she had been, as she hasn’t appeared on screen for quite some time.

Where is baby Abi?

On a Reddit post, one fan wrote: “Stuart apparently hangs out with toddler Abi a lot off screen. My only question is, who was watching her all day and where has she been this year?”

Responding to the comment, one fan wrote: “Same place as baby Cherry. That’s the problem with these storylines.

“A pregnancy is good for nine months of drama and more, but they don’t seem to think beyond that (ie. they created a new character and don’t really have a place for them – at least until the reappear on the Square as angsty teenagers intent on a showdown).

“But until then, babies are with sitters or a lesser seen character is minding all of them together and younger kids are at school or upstairs.”

My only question is, who was watching her all day and where has she been this year?

On Twitter, viewers also wondered where the toddler has been.

Who knew they had Abi? We never see her with them #EastEnders

Hasn’t Stuart been around Abi more than Max? More importantly, where is Abi? #EastEnders

nobody has seen baby Abi for months and suddenly they care. #EastEnders

Earlier this year, fans were also left confused as Cherry hadn’t been seen in months.

Read More: EastEnders and Coronation Street did a crossover on The Big Night In virtual pub quiz

On Christmas Day 2018  after Cherry’s birth, Kat found out her husband had fathered Hayley’s child.

Although initially furious, she soon forgave Hayley. As Hayley struggled to cope, she left the baby in Kat’s care.

However she hasn’t been seen much on screen.