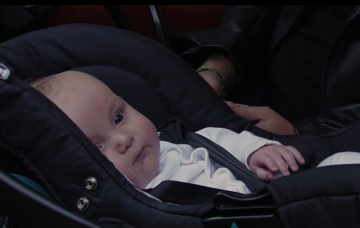 Cheery was left with Kat Slater by her mum Hayley

Fans of EastEnders have been left confused as baby Cherry hasn’t been seen in months.

Cherry, who is the daughter of Hayley Slater and Alfie Moon, was left in the care of Hayley’s cousin Kat Moon.

However, she hasn’t been seen for quite some time leaving viewers wondering where she is.

Where is Kat's kids and Cherry? The Slaters are broke but Jean had a wad of cash for the party, from Daniel? @bbceastenders #Eastenders Alfie needs to return

Where is baby Cherry? #EastEnders

In 2018, a pregnant Hayley Slater arrived in Walford as Kat’s cousin.

It was soon revealed that the father of Hayley’s baby was Kat’s husband Alfie and that they had slept together in Spain.

In October, Hayley went into labour and gave birth to a little girl who she called Cherry.

In her short life, Cherry has already been through a lot of drama.

On Christmas Day 2018, Kat learned the truth about Cherry’s paternity and was upset.

During an argument, Hayley ended up pushing Alfie down the stairs leading them to believe he was dead, however he was alive and had taken Cherry.

Eventually Alfie returned Cherry, but Hayley struggled to cope looking after her daughter and with Alfie gone, Hayley left her in the care of Kat.

Have you noticed Cherry hadn’t been seen in a while?