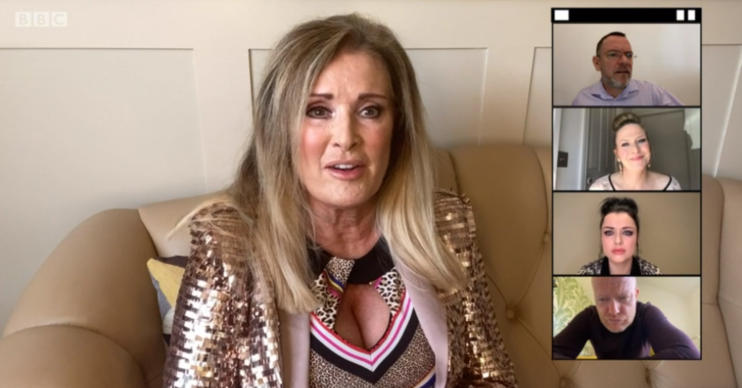 On the show, Linda and Ian organised a pub quiz for all Albert Square residents, who are in lockdown.

As several of the regulars joined the video call, so did an unexpected guest… Liz McDonald from Coronation Street.

As she joined the call, Ian asked: “Who are you?”

Liz casually introduced herself before saying: “Oh heck, I think I might be in the wrong video chat? Is this the virtual quiz night for the Rovers Return?”

Read More: Coronation Street: How do Johnny and Scott know each other?

Liz quickly mocked Linda saying: “Get you! And I bet you don’t charge less than a tenner for a pint!” Causing Linda to saying the iconic line: “Get out of my virtual pub, you’re barred!”

As a response, Liz told Linda not to come to the Rovers as she is also barred before hanging up the call.

Fans loved the crossover between the two soaps and went wild on social media.

Ahhh… loved that. The Corrie legend that is Liz turning up for the Queen Vic quiz #EastEnders #Corrie #soaps #Bignightin @bbceastenders @itvcorrie

Haha a great contribution from #Eastenders (and one important #Corrie character) that was funny and nice to create a vision of what the characters might be like in lockdown. #TheBigNightIn

After Liz hung up, Ian went to read the first question but was cut off by bad connection.

Sonia then offered to play her trumpet to keep her friends entertained but they all declined her offer.

Honey then suggested they try doing the quiz another time and residents all signed off the call.

This isn’t the first time Coronation Street and EastEnders have had a crossover.

In 2010, the two soaps collaborated for BBC Children In Need in a clip called East Street.

Love how they brought Corrie into it.

In the clip, Liz revealed she gave up a child for adoption. She made charms out of nappy pins and gave the charm to the adoptive parents to give to her daughter when she turned 18.

Kat said Liz isn’t her mother but Liz said she is, referencing the iconic scene with Zoe and Kat.

Did you see EastEnders and Corrie’s crossover last night? Leave us a comment on our Facebook page @EntertainmentDailyFix and let us know what you think!