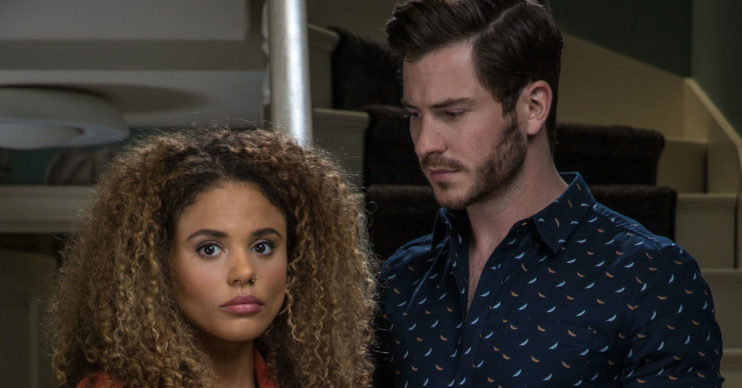 Gray and Karen are seen in a tense exchange

A new EastEnders fan theory has suggested that Gray Atkins will kill his wife Chantelle during the coronavirus lockdown.

Fans of the show know Chantelle is a victim of domestic abuse and is often subjected to physical and verbal abuse from her husband.

However, everyone else on the Square sees them as the perfect couple. But could that all be about to change?

One way systems, doing their own make-up (under supervision!), and hugs at 2m. Take a butchers behind-the-scenes, with some familiar faces telling us what work life looks like, in a socially distanced Walford… #backtowork #socialdistancing pic.twitter.com/O6UPT8DSS6

In a behind the scenes look at EastEnders’ return to filming, Lorraine Stanley, who plays Chantelle’s mum Karen Taylor, talked about returning to work.

As she spoke, clips were shown of Gray and Karen in The Vic. However it seems like Gray was losing his temper with his mother-in-law.

There also seemed to be no sign of Chantelle.

EastEnders recently came off air as episodes have run out. However, fans have a theory that when the show returns, Chantelle will have been killed off in lockdown.

What did EastEnders fans say about Chantelle and Gray?

In the EastEnders forum, Walford Web, one fan wrote: “I wonder if they’re going to use lockdown as a plot point for the Chantelle and Gray story?”

A second said: “More convinced Chantelle is a goner! The actress got new headshots and we all know what that means… Lorraine Stanley is saying Karen has a dark storyline coming up. I don’t see Chantelle leaving Gray and him just going to prison or coming back for some revenge plot which sees him die as it’s all been done before.

“We also don’t know if the story Kate Oates said scared her last year when she took charge has happened yet… I can’t think of anything else that may have applied to.

“This will be her version of Aidan’s suicide in Corrie and Donna’s death in Emmerdale.”

Another added: “Imagine if the first episode back starts with a funeral procession (like Footballers Wives Season three) where we spot characters one by one and rule them out, until eventually we see a shot of the coffin being taken out of the hearse with a ‘Chantelle’ flower arrangement on it.”

During the coronavirus lockdown, police revealed they are started to see a rise in domestic abuse cases.

Visit the NHS website if you are suffering domestic abuse and need help or advice.