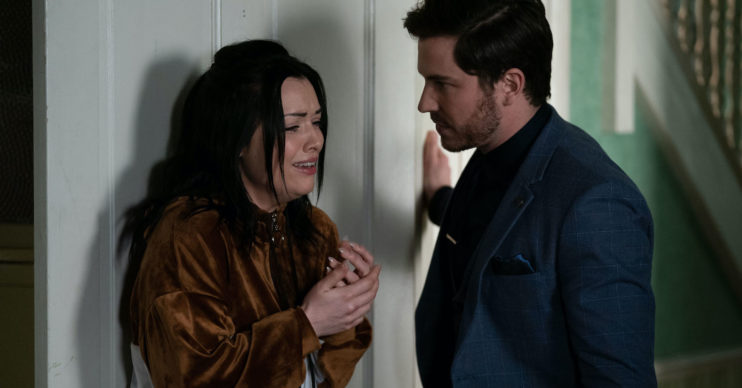 Gray is married to Chantelle

EastEnders fans have branded Whitney Dean a ‘homewrecker’ after she tried to kiss married Gray Atkins.

Over the last few months, Gray has been working as Whitney’s solicitor as she is up for a murder charge.

But as he’s been helping her, it’s become more and more clear she has feelings for him, despite the fact he’s married to her friend Chantelle.

In last night’s episode (Tuesday, June 9) Gray and Chantelle had Whitney stay with them after she revealed she was struggling to sleep in her home, where Leo was killed.

When she left, Gray became angry with Chantelle as she needed to use his car to do some errands for her boss, Kheerat.

As viewers know Gray is abusive and gets jealous easily, so when he checked his car tracker and saw his wife had been to various locations, he was fuming.

But when he spotted the car had been used without his knowledge a few days previously, he became even more angry.

Later, he blew off a dinner with Chantelle’s family to help Whitney, but things didn’t quite go to plan.

Whitney began to recount what happened that day with Leo. As she remembered how he tried to kill her, she broke down in tears.

Seeing her upset, Gray tried to calm her down. But Whitney went in and kissed him.

As they both realised what was happening, Gray and Whitney both pulled away.

Despite Whitney’s apologies, fans were left furious, branding her a ‘homewrecker’ for trying to kiss her friend’s husband.

Whitney is a different type of home wrecker, she never gives it a rest #eastenders

what is wrong with whitney she needs therapy throwing herself at every man, she’ll be trying it on with phil mitchell next #eastenders

Whitney really out here throwing herself at every toxic man #EastEnders

When will Whitney stop throwing herself at men!?????? #eastenders

However, some viewers defended Whitney saying she’s in a vulnerable state.

Poor Whitney! Please STOP slagging the girl off. She’s vulnerable & very damaged girl. all she wants is be loved & wanted, yes she’s made mistakes who hasn’t? The girl has been abused from age 12, and beaten by her husband. She deserves happiness NOT abuse! #Eastenders

The disrespect towards Whitney! Yes she shouldn't have kissed Gray, but come on, it was obvious that was what Gray was trying to get her to do! #EastEnders

Viewers know that Gray and Chantelle don’t have a perfect relationship.

What is is with Whitney Dean and married blokes?

The solicitor has been abusing his wife, which has included beating her.

What happens next for Gray?

In next week’s episodes, Gray still believe Chantelle is lying to him over the car and she is desperate to prove her innocence.

She shows him that she was at the dentist when the car was used. But despite the evidence, he still doesn’t believe her.

However, what they both don’t know is the car was used by Ben Mitchell to go on a dodgy job.